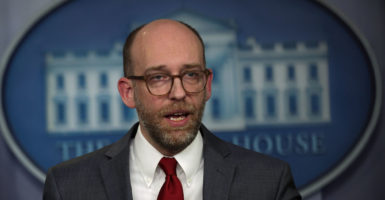 Fiscal responsibility is key to draining the swamp, the White House budget chief said Saturday in remarks to an annual gathering of conservative activists outside Washington.

“We cannot permanently drain the swamp if we don’t reduce spending in agencies that are regulating the American people, that are filling the offices across the country, the accounts, the number of employees in these agencies,” Russ Vought, acting director of the Office of Management and Budget, told the crowd at the Conservative Political Action Conference, or CPAC.

“We connect draining the swamp to our efforts to reduce spending,” Vought said.

President Donald Trump has faced criticism from conservatives for signing budgets from Congress that escalate federal spending and debt. However, Trump consistently has proposed budgets to reduce the deficit and debt.

Vought said Trump has proposed more deficit reduction than any other president in history.

Vought also stressed deregulation efforts that are boosting the economy. Trump promised to eliminate two regulations for every one regulation adopted, he said, and in practice that ratio has become 8 to 1.

It’s a big difference from the previous administration, he said.

“We won that in legislation and we’re about to finalize leasing for that,” Bernhardt said, adding: