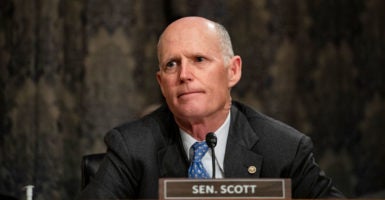 The World Health Organization should have a reckoning for  parroting China’s misinformation about the coronavirus, taking a hit to its budget if it doesn’t reform, Sen. Rick Scott, R-Fla., said Thursday in an interview with The Daily Signal.

“Everything coming out of China has been wrong, and the WHO has said they [the Chinese] have done a great job,” Scott said in the phone interview, adding that the United Nations entity “panders to China.”

“If the WHO had done its job, not as many people would be dead, we would be further along right now, and every country would be better off,” the Florida Republican told The Daily Signal.

Scott, a member of the Homeland Security and Governmental Affairs Committee, the Senate’s chief oversight panel, said he has talked to committee Chairman Ron Johnson, R-Wis., about an investigation of WHO, and that Johnson supports the idea.

The United States contributes 14.7% of the World Health Organization’s $38 billion budget, while China contributes only 0.21%, less than 1%, according to WHO’s numbers.

Congress authorized about $123 million in taxpayer funding for WHO in the last fiscal year. President Donald Trump’s budget request for fiscal 2021 proposes to reduce funding to about $58 million.

“We could cut funding or we could tie future funding to certain changes,” Scott said. “It is supposed to be the World Health Organization, world health, but it panders to China.”

Senate hearings almost certainly wouldn’t happen until late summer at the earliest, at a point when America has moved beyond the crisis point, Scott said. But, he said, the investigation could begin by gathering information:

We would try to have the [WHO] people come in for the hearings who made the decisions and tell us why they did it. There are plenty of emails we could get. I can’t imagine the internal emails will say the same thing WHO officials were saying publicly. When people say something different in internal documents than they say in public, that’s when people get in trouble.

China purposefully misled the world in underreporting the number of deaths there, three U.S. intelligence officials have told the White House, according to Bloomberg News.

“Intelligence reports say that China had different information than what they were saying publicly, and the WTO has said it is working hand-in-hand with China,” Scott told The Daily Signal.

“I think the medical community interpreted the Chinese data as this was serious but smaller than anyone expected, because I think probably we were missing a significant amount of the data,” Birx said.

In a letter in February, Scott requested that WHO do its own internal investigation.

Asked about jurisdictional issues and whether subpoenas could be enforced with an international body, Scott replied: “If they don’t provide us with information, what does that tell us? … We might want to think about whether we want to invest money into that type of organization.”

The World Health Organization, an arm of the United Nations, found out Dec. 30 about the spread of a disease in Wuhan, China, thought to be pneumonia. More than two months later, on March 11, WHO declared the coronavirus to be a global pandemic.

China backed Tedros in May 2017 when he ran for the top job at the World Health Organization. Chinese diplomats “worked tirelessly behind the scenes to help Tedros defeat the United Kingdom candidate for the WHO job, David Nabarro,” Washington Post columnist Frida Ghitis wrote.

Tedros criticized the United States and other countries that blocked travel from China as the outbreak grew.

Considering “what he said versus reality,” Scott said, it seems that China influenced WHO’s director-general.

The organization was aggressive in pushing all countries to act, Tarik Jašarevic, a WHO spokesman, previously told The Daily Signal.

“While every country makes its decisions based on its own risk assessment and context, WHO encourages increasing testing and mobilizing government and citizens to take action to fight COVID-19. We call on all countries to take strong action as early as possible when doing so can have the greatest impact,” Jašarevic said.

“Dr. Tedros has helmed regular press conferences nearly daily for months—his proactive approach to communicating about the coronavirus response has been emulated by leaders in such countries as U.K. and U.S.,” he said.

The U.S. government predicts the coronavirus pandemic could kill more than 100,000 Americans.

Live Science reported that the coronavirus had infected at least 216,722 Americans and killed 5,137 as of Thursday afternoon. More than one-third of those deaths—2,219—were in New York.

No other state had more than 400 deaths. Florida has 7,717 confirmed cases of COVID-19 and 27 deaths, according to the Florida Department of Health.

Florida’s other senator, Republican Marco Rubio, also has been critical of WHO’s ties and “subservience” to China.

“Once this pandemic is under control, WHO leadership should be held to account,” Rubio wrote Wednesday in National Review.

Scott co-sponsored legislation with Sen. James Inhofe, R-Okla., to include Taiwan in the World Health Organization, since that country had great success in responding to COVID-19.

It was “disgusting,” Scott said, how WHO’s assistant director-general, Bruce Aylward, refused to answer a question in a recent interview about admitting Taiwan to the organization.

WHO’s Jašarevic told The Daily Signal that since 1971, countries participating in the United Nations General Assembly recognized the People’s Republic of China as the only legitimate representative of China under Resolution 2758. China’s communist government views the island nation of Taiwan as a Chinese province, not an independent country.

The reputation of WHO has been severely harmed by its handling of the coronavirus pandemic, former Army intelligence officer Greg Barbaccia told The Daily Signal in a phone interview.

“The WHO repeated the Chinese government’s initial talking points and undermined its [own] credibility,” said Barbaccia, an expert in counterintelligence and corporate espionage. “China put lives at risk, not only of their own people but across the international community. It’s unfortunate the WHO provided that same misleading information.”