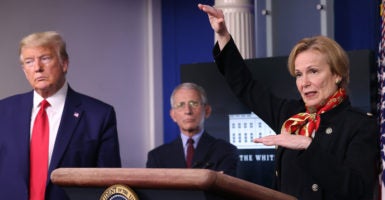 The death toll could be lower if Americans do "everything they are supposed to be doing," Dr. Deborah Birx, the White House's coronavirus response coordinator, says. Pictured: Birx speaks Tuesday evening as President Donald Trump and Dr. Anthony Fauci, director of the National Institute of Allergy and Infectious Diseases, listen during the daily coronavirus briefing. (Photo: Win McNamee/Getty Images)

Even if Americans follow mitigation guidelines, the United States could see 100,000 to 200,000 deaths as a result of the coronavirus, according to projections explained by health officials Tuesday evening at the White House.

“This is going to be a very, very painful two weeks,” President Donald Trump told reporters of the days to come.

Dr. Anthony Fauci, director of the National Institute of Allergy and Infectious Diseases, had mentioned before the possibility of more than 100,000 deaths from COVID-19, the disease caused by the new coronavirus.

But the number now is the government’s formal projections.

Dr. Deborah Birx, coordinator of the White House’s coronavirus task force, explained the numbers in a slide show, noting pronounced increases in the states of New York and New Jersey.

“It’s a projection based on using what’s in Italy and then looking at all the [computer] models,” Birx said, adding:

As you saw on that slide, that was our real number, 100,000 to 200,000 [deaths]. We really believe and hope every day we can do a lot better than that [by saving lives], because that’s not assuming 100% of every American does everything they are supposed to be doing. But I think that’s possible.

Trump announced Sunday that the administration was extending social distancing and related government guidelines to “slow the spread” until April 30.

The computer models suggest the number of deaths will peak over the next two weeks, then begin to slowly decline. But deaths will continue into June.

“I want every American to be prepared for the hard days that lie ahead,” Trump said, adding:

Trump explained that he wanted to be positive.

“It’s easy to be negative,” he said. “I’m a cheerleader for this country.”

The president noted models showing that if officials took no mitigation actions, COVID-19 would have killed 2.2 million Americans.

Asked later if it is likely the United States will have 100,000 coronavirus deaths, Fauci said, “The answer is yes.”

“As sobering a number as that is, we should be prepared for it,” Fauci said. “Is it going to be that much? I hope not, and I think the more we push on the mitigation, the less likelihood it would be that number. But to be realistic, we need to prepare ourselves that that is a possibility.”

Fauci also explained that COVID-19 deaths will continue to occur into June.

“Deaths always lag,” he said. “So you will be seeing deaths at a time when, as an epidemic, we are doing really, really well. Because the deaths will lag.”