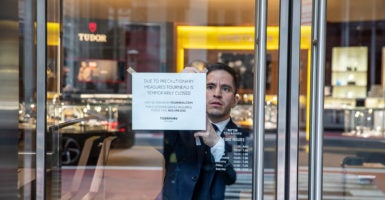 A man hangs a sign in a Tourneau store closed on March 17, 2020, in New York City. Schools, businesses, and most places where people congregate across the country have been shut down as health officials try to slow the spread of COVID-19. (Photo: Victor J. Blue/Stringer/Getty Images)

The U.S. economy lost 701,000 jobs in March, while the unemployment rate rose to 4.4%, according to Department of Labor data released Friday.

Total nonfarm payroll employment fell by 701,000 in March, according to the Bureau of Labor Statistics report, reflecting the “effects of the coronavirus (COVID-19) and efforts to contain it.”

March job numbers come amid reports of massive unemployment numbers due to the coronavirus pandemic. Economists predicted to The Daily Caller News Foundation that March’s losses would not be reflected in the BLS report due to “the method and timing of the data collection.”

“Almost all of the announcements of states closing nonessential businesses came after the BLS survey was conducted for March, so while the number won’t be good, it won’t nearly reflect how much the bottom fell out of the job market over the last several weeks,” Hamilton Place Strategies partner Matt McDonald told The Daily Caller News Foundation on Thursday. “Next month’s data will be much worse, and the eventual revisions to March will also be bad.”

President and CEO of the Job Creators Network Alfredo Ortiz noted that the Friday morning jobs report shows that “701,000 Americans lost their jobs.”

“As President Trump said, we should expect to experience a ‘painful’ next two weeks and perhaps longer,” Ortiz said in a statement provided to The Daily Caller News Foundation. But Ortiz promises there is “light at the end of the tunnel.”

“Starting today small businesses can begin applying for the $349 billion Paycheck Protection Program, which will give them much-needed cash to keep payroll flowing, while covering rent, utilities, and other overhead,” Ortiz said. “The Trump administration is laser-focused on making the program work, and JCN is doing its part by mobilizing job creators to participate. The administration has an all-hands-on-deck mentality, and so do we.”

“We are a resilient country and we will get through this and emerge stronger than ever,” Ortiz added.

Before the March jobs report, job growth had held strong since February 2019, when just 33,000 jobs were added.

The unemployment rate had held steady at between 3.7% and 4% for more than a year, before the April 2019 jobs report showed it drop to 3.6%. Prior to April’s report, the consistent unemployment rate suggested that workers were jumping back into the workforce to fill open jobs, rather than the workers who are collecting unemployment welfare.