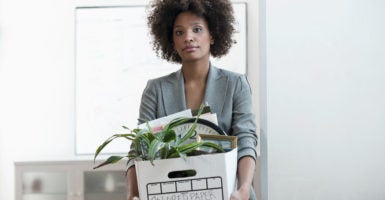 The nation's 113-month streak in job creation ends as we see the tip of the iceberg of the economic damage done by the COVID-19 pandemic. (Photo illustration: Image Source RF/Cadalpe/Getty Images)

The start of the devastation from the Chinese virus is clearly reflected in the new monthly jobs report from the U.S. Bureau of Labor Statistics, which shows that the economy axed 701,000 jobs in March. The unemployment rate jumped from a near historic low of 3.5% to 4.4%.

This report brings an end to the nation’s 113-month streak in job creation, and shows only the tip of the iceberg of the damage many Americans are beginning to experience during the COVID-19 pandemic.

So where are we currently? And where do we go from here?

According to the report, most of the damage is to the hospitality industry, which accounts for nearly two-thirds of all the job losses. That’s a stark contrast to last month, where the same category led in job creation after adding 53,000 jobs.

In addition, the number of unemployed who were jobless for fewer than five weeks increased by 1.5 million to 3.5 million, accounting for almost half of the unemployed.

Other indicators of the devastation include a reduction of 3 million in total employment, bringing the labor force participation rate to 62.7%, which represents a decrease of 0.7 percentage points.

Average hourly earnings did increase by 11 cents to $28.62 per hour, which means that over the past year wages have increased by 3.1%. But some would suggest this increase is due to lower wage earners’ losing jobs first, as higher-paid employees are able to work from home.

Here’s where we saw the bulk of job losses:

The federal government added 18,000 jobs in March, reflecting the hiring of 17,000 temporary workers to help conduct the 2020 census.

In analyzing last month’s incredible jobs report, I suggested that this is a calm before the storm, and that we’ll have to wait and see. We now see what happens when a global pandemic hits a booming economy and almost entirely shuts it down.

And we haven’t even seen the worst of it.

That’s because this report reflects only the first half of March, before many of governors ordered the closure of “nonessential” businesses.

This means the true unemployment numbers could be as high as 10%, according to my Heritage Foundation colleague Rachel Greszler, who factors in the number applying for unemployment claims over the last two weeks of March.

The numbers of unemployed only will increase in the coming weeks.

In response to the near-shutdown of the private sector, Congress passed a massive spending package called the CARES Act. One key provision provides temporary assistance in the form of partially forgivable loans to small businesses that are willing to keep employees on the payroll.

But one major problem with the law, Greszler argues, is that workers will get $600 a week in addition to full unemployment compensation. This means a typical full-time American worker would earn $2,300 more through four months of unemployment than he would while working.

Typically, to receive unemployment benefits, someone must be laid off by an employer. But another flaw in the CARES Act allows for the employee to decide.

This challenges the effort to keep Americans employed, as Greszler notes: “Now that employers know that workers actually can come out ahead through unemployment, they almost certainly will lay off some workers who they otherwise might have tried to retain.”

Notably, business owners and government officials are taking dramatic action to continue the fight against the Chinese virus.

The health and safety of America is of utmost importance.

We must do our best to ensure that bad policy is not sought as the remedy to a miserable situation.

We must ensure that while government provides a bridge for workers and businesses who are struggling, the temporary assistance doesn’t stand in the way of returning to work when the time comes.

Yes, the job creation streak is over, and we haven’t even begun to see the full extent of the damage done. Yes, there is significant work to be done to restart the economy. Congress should start by fixing the CARES Act, to make it work better for more Americans.

To get back on track, we must stick to the ideas that brought us the robust and bountiful job market we saw for 113 months.

After the crisis, governments on the local, state, and federal levels will need to step back by removing disincentives to work and produce, so that the private sector can lead the recovery.