In California, a Sign the Coronavirus Crisis Won’t ‘Go to Waste’ 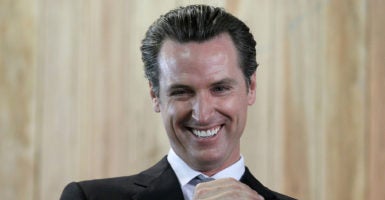 “You never want a serious crisis to go to waste.”

That was what Rahm Emanuel, a former mayor of Chicago who also served as chief of staff for President Barack Obama, said about the 2007-2008 financial crash, viewing that moment as an opportunity to pass legislation that likely otherwise would not be seriously considered.

“[W]hat I mean by that, it’s an opportunity to do things you think you could not do before,” Emanuel explained at the time.

When asked by reporters on Wednesday whether the coronavirus pandemic will usher in a new “progressive era,” Newsom said:

I think it’s an opportunity anew for both parties to come together and meet this moment and really start to think more systemically, not situationally.

Not just about getting out of this moment, but more sustainably and systemically to consider where we can go together in this historic moment if we meet it at a national level and at a state and subnational level.

Needless to say, America is facing an emergency health crisis that has prompted not only the federal government, but also especially state and local governments, to take extreme actions.

Many of those actions are intended to “flatten the curve” of the coronavirus pandemic to stabilize our health care system and to save lives.

However, as we come to grips with the full impact of government actions at this time, it’s still important to be wary of constitutional and governmental overreach.

John Malcolm, vice president of the Institute for Constitutional Government and director of the Meese Center for Legal and Judicial Studies at The Heritage Foundation, wrote that President Donald Trump and most state governors have operated within their constitutional authority in their responses to the crisis.

Malcolm also noted that the 10th Amendment to the Constitution gives enormous latitude to state governments to “regulate behavior and enforce order within their territory in order to protect the health, safety, and general welfare of their inhabitants.”

Controlling pandemics is certainly one of the key functions of government. In some cases, however, authorities are using the current crisis as a justification for, among other things, implementing gun control.

For instance, the city of Champaign, Illinois, released an ordinance that doesn’t outright ban guns, but does give authorities the likely unconstitutional power to do so.

And some local governments seem to be going out of their way to restrict firearms purchases.

“We are having panic-buying right now for food,” Liccardo said in mid-March, according to the San Jose Mercury News. “The one thing we cannot have is panic-buying of guns.”

California governments have an interesting take, however, on what’s essential versus nonessential. Los Angeles County listed cannabis dispensaries as among the essential businesses.

But if Newsom is serious about helping Californians as much as possible and not just in furthering a progressive agenda, there are some positive steps he could take.

Since California is taking some of the more extreme measures to clamp down on the spread of the coronavirus, perhaps state officials should be more aggressive about suspending—or even repealing—laws that make it harder to stay safe and make a living at this time.

One law to take a look at is AB 5, an absurd new restriction on gig employment and freelancing.

The law was bad enough in normal times, but it’s particularly pernicious now as it actively discourages expanded use of freelance writers, who can work from home, not to mention others who may need gig work to make up for lost jobs and wages as a result of the mandated closures of many businesses and other employers.

If the state is serious about quarantines and social distancing, surely it should be promoting laws that allow people to make a living outside of a traditional office, right?

While some governments have been overzealous in putting their policy preferences ahead of simply protecting the public good, the critical needs of the moment might allow us to see other laws and regulations as unnecessary and/or ineffectual.

Tristan Justice at The Federalist compiled an interesting rundown of some regulatory rollbacks during this crisis that could lead to more permanent change.

From less-consequential things, such as loosening rules on alcohol delivery, to more impactful ones, such as giving more leeway to doctors and nurses working across state lines, such stopgap measures could lead to a rethinking of such policies in the future.

For instance, telemedicine will be an incredibly helpful tool in stemming the pandemic, but it has many other uses, too. State and local regulations have controlled the growth of that industry, but maybe now circumstances will change that.

In this moment of necessity, one should have faith that Americans—the most entrepreneurial people in human history—will look to themselves and their communities to find ways to come out the other side of this crisis stronger than before.

Perhaps it shouldn’t be about not letting a serious crisis go to waste or about launching another “progressive era,” but about finding pragmatic ways to jump-start a country and economy that have been dealt a terrible blow by the coronavirus and economic shutdowns.