Triggered by Dr. Seuss and ‘The Muppet Show’ 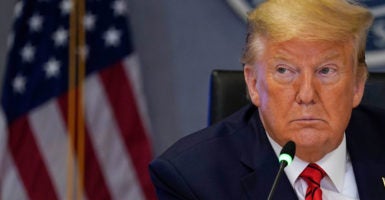 Congress has passed several laws that President Donald Trump is using in a valiant effort to stop the spread of COVID-19. Pictured: The president attends a teleconference with governors Thursday at the headquarters of the Federal Emergency Management Agency. (Photo: Evan Vucci-Pool/Getty Images)

Although Napolitano is right to be concerned, President Donald Trump and other federal, state, and local officials appear to be acting within the bounds of the Constitution in responding to the severe threat posed by spread of the new coronavirus disease, which health officials call COVID-19.

Napolitano first quotes from the Supreme Court’s 1866 opinion in Ex parte Milligan (“The Constitution of the United States is a law for rulers and people, equally in war and in peace, and covers with the shield of its protection all classes of men, at all times and under all circumstances.”).

Then he accuses government officials—federal, state, and local—of “totalitarian impulses” and argues that “no matter the state of difficulties—whether war or pestilence—the Constitution protects our natural rights, and its provisions are to be upheld when they pinch, as well as when they comfort.”

Citing various constitutional provisions that protect individual liberty, Napolitano ends his article by asking: “If liberty can be taken away in times of crisis, then is it really liberty; or is it just a license, via a temporary government permission slip, subject to the whims of politicians in power?”

In that same vein, Benjamin Franklin once famously said, “Those who would give up essential liberty, to purchase a little temporary safety, deserve neither liberty nor safety.”

Although some have argued that Franklin was actually supporting the right of the government to act to protect the collective security of Americans, the quote clearly has a different connotation to modern ears.

Napolitano is certainly correct that during stressful times, such as we are experiencing now, it is vitally important that we adhere to the “supreme law of the land”; namely, the Constitution.

He is also correct that a few local officials may be infringing on our constitutional rights through some of the measures they have announced. But if that’s so, it’s only a small handful.

Let’s start with the basics.

As Supreme Court Justice Robert Jackson trenchantly noted in 1949 in his dissenting opinion in Terminiello v. Chicago, the Constitution is not a “suicide pact.”

In the Federalist Papers, Alexander Hamilton cited the need for an energetic executive who could act with “decision, activity, … and dispatch.” Those are the very qualities needed in a time of crisis, and the Constitution vests the president with many of the powers he needs to do just that.

The Constitution provides, among other things, that the president shall be the commander in chief of the military and of the National Guard, and has the duty to “take care that the laws be faithfully executed.”

The Constitution also vests Congress with the power to “regulate commerce with foreign nations, and among the several states.”

Pursuant to these authorities, Congress has passed several laws that Trump is using in a valiant effort to stop the spread of this disease.

Trump has invoked the Stafford Act, enabling him to tap into a $50 billion emergency fund for disaster relief. He has invoked the Public Health Service Act, enabling the government “to make and enforce such regulations as … are necessary to prevent the introduction, transmission, or spread of communicable diseases from foreign countries into the states or … from one state … into any other state.”

The president also has invoked the Defense Production Act, which will enable the president to direct private industry to allocate raw materials and prioritize the production of medical supplies, such as protective gear, ventilators, and other much-needed equipment and to direct the military to tap into its strategic reserves to accomplish these goals.

These authorities have been used in other, less dire circumstances.  For example, in 2000, President Bill Clinton invoked the Stafford Act to respond to an outbreak of the West Nile virus in New York and New Jersey, and in 2019, Trump invoked that act to respond to flooding in Nebraska and Iowa.

The 10th Amendment reserves to the states broad police power to regulate behavior and enforce order within their territory in order to protect the health, safety, and general welfare of their inhabitants.

Significantly, the Supreme Court has held that states can invoke such authority—within reason—to respond to a health crisis.

In response to an outbreak of smallpox more than a century ago, the Massachusetts Legislature passed a mandatory vaccination law for adults, imposing hefty fines and potential imprisonment for those who refused.

Proclaiming the law to be an invasion of his liberty, Henning Jacobson, a pastor and community leader, refused to be vaccinated, was prosecuted and fined, and subsequently filed a lawsuit challenging the constitutionality of this edict.

Writing for the 7-2 majority in Jacobson v. Massachusetts (1905), Justice John Marshall Harlan rejected Jacobson’s argument, upholding the state’s right to vaccinate Jacobson against his will.

Citing precedent in which the court had upheld the authority of states “to enact quarantine laws and health laws of every description,” Harlan wrote that “the liberty secured by the Constitution of the United States to every person within its jurisdiction does not import an absolute right in each person to be, at all times and in all circumstances, wholly freed from restraint.”

Society based on the rule that each one is a law unto himself would soon be confronted with disorder and anarchy. Real liberty for all could not exist under the operation of a principle which recognizes the right of each individual person to use his own, whether in respect of his person or his property, regardless of the injury that may be done to others.

Adding that “a community has the right to protect itself against an epidemic of disease which threatens the safety of its members,” the court held that in response to a potential epidemic of a life-threatening disease, a state can subject its inhabitants “to such restraint, to be enforced by reasonable regulations, as the safety of the general public may demand.”

Just a few years later, in 1918, in Arver v. United States (better known as the Selective Draft Law Cases), Chief Justice Edward White, writing for a unanimous Supreme Court, upheld the constitutionality of the Selective Service Act, which imposed compulsory military service for adult males to address an “existing emergency”—the shortage of military personnel needed to fight the “war then and now flagrant.”

The court rejected the challenge to the law, even though conscription clearly had a dramatic effect on the liberty of those who were marched off to war against their will, many of whom ultimately died on the field of battle from wounds they suffered or from diseases to which they were subjected.

So, when governors, using the police power under their respective state constitutions, restrict large public gatherings, enact quarantines, and take other prophylactic measures to suppress the transmission of the virus, they are not, under the circumstances, acting to satisfy their “totalitarian impulses,” but rather to defeat a public health crisis that is, unfortunately, very real.

Napolitano is right to highlight the importance of adhering to the Constitution, which has often been sorely tested and sometimes dishonored during stressful periods throughout our nation’s history.

While we should be ever-vigilant to safeguard our liberties, Trump and the overwhelming majority of state and local officials have, thus far, not transgressed their constitutional authority.