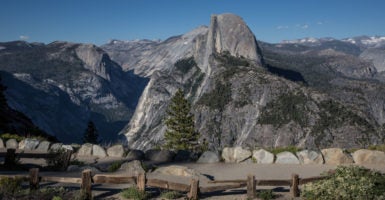 Like many Americans, I have sweet memories tied to particular national parks. Yosemite is one of them—my parents hiked Half Dome when my mother was pregnant with me, and I climbed it “again” for my 25th birthday. Pictured: The granite features of Half Dome are viewed from Glacier Point on July 1, 2019, in Yosemite Valley, California. (Photo: George Rose/Getty Images)

One of the hidden blessings of the coronavirus pandemic is the chance to social distance at national parks, free of admission.

This doesn’t make it “worth it”—not even close. But parks are wisely following state guidance to make individual decisions about whether to close public access or take individual measures to reduce risk by closing visitor centers and facilities, suspending operations, and blocking certain routes.

But it’s a great chance to enjoy beautiful scenery, take a step back to gain perspective, and feel restored. For policy people, it’s also an opportunity to think about how to ensure the parks remain places of respite for years to come.

The Council on Environmental Quality recently concluded the public comment period for an update to the regulations that affect federal land management and other issues.

It’s been more than 40 years since the council updated its regulations under the National Environmental Policy Act, which requires environmental impact analysis of proposed federal projects, activities, and permits.

This law has proven a problematic hurdle for those on the left and right, at federal, state, and local levels, and amongst average Americans.

Here’s just one example of why reform of the National Environmental Policy Act matters to national parks.

The park finalized a restoration and management plan in 2000 that had the support of California residents and environmental groups, such as the Wilderness Society, National Park Conservation Association, and the Natural Resources Defense Council.

As the San Francisco Chronicle wrote: “Years of acrimonious debate over how to manage a crown jewel of America’s national park system gave way to consensus that the Park Service had finally gotten it right.”

But that’s also when things got complicated. Simultaneously, Yosemite National Park finalized a separate blueprint for the Merced River to satisfy its designation by Congress in 1987 under the Wild and Scenic River Act.

Litigation prevented the park from moving forward with the Yosemite Valley plan despite its consensus of so many varied parties. In the interim, the park “could only undertake routine, intermittent, and operational actions within the corridor.”

Not only does this injunction prevent [the National Park Service] from protecting the visitor experience, natural and cultural resources, and the values of the Merced River, but it also puts the health and safety of park visitors and residents at significant and unnecessary risk.

Finally, in 2014, the park completed an amended blueprint that allowed it to move forward on plans throughout other areas.

Like many Americans, I have sweet memories tied to particular national parks. Yosemite is one of them—my parents hiked Half Dome when my mother was pregnant with me, and I climbed it “again” for my 25th birthday.

But I don’t necessarily equate love for the outdoors with more regulations and more government. If a certain policy isn’t working, we need to be willing to try something new.

Reforming the National Environmental Policy Act is just that. In fact, reforming it to be less burdensome could enable parks to devote fewer resources to lawyers and litigation and more to stewardship.

One of the tragedies of the Yosemite fiasco is the squandered time and money while the park waited in litigation limbo.

My hope is, rather than be loyal to a process, we can cut back the red tape and find ways to achieve better outcomes for national parks. Reforming the National Environmental Policy Act is a big step in that direction.