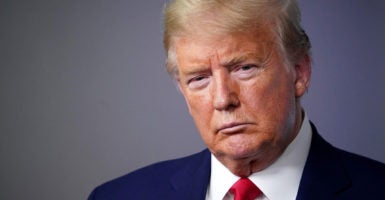 President Donald Trump promised on Inauguration Day that “the forgotten men and women of our country will be forgotten no longer.” Pictured: The president listens Tuesday evening during the daily briefing on the coronavirus at the White House. (Photo: Mandel Ngan/AFP/Getty Images)

In times of crisis such as we face now with the coronavirus pandemic, presidents often speak movingly of the “forgotten Americans.” But they’re not always talking about the same Americans.

In 1932, President Franklin D. Roosevelt defined “the forgotten man” as being “at the bottom of the economic pyramid”—down-and-out workers who, stuck between the breadline and a Hooverville, needed Washington to rescue them.

Roosevelt was also redefining the role of the federal government, declaring it to be responsible for that man’s welfare. To meet this responsibility, FDR prescribed more central planning and control—in the words of Forbes’ Davis Davenport, “The elites holding the reins of power in the name of helping the forgotten man.”

That’s not what President Donald Trump had in mind on Inauguration Day when he promised that “the forgotten men and women of our country will be forgotten no longer.”

Trump wanted to reverse FDR’s course, “transferring power from Washington, D.C., and giving it back to you, the American people.”

For too long, he said, “a small group in our nation’s capital has reaped the rewards of government while the people have borne the cost.”

Trump’s forgotten Americans were middle-class workers and families whose wealth, he said, “has been ripped from their homes and then redistributed across the entire world.”

Though taken for granted by elitist politicians, Middle Americans have played a major role in American politics and the conservative movement for nearly six decades. They first made their presence felt in 1964 when the Draft Goldwater Committee led the way to the selection of Sen. Barry Goldwater of Arizona as the Republican presidential nominee.

Goldwater had written a manifesto that focused on the “forgotten American” whose interests “were not represented by existing political pressure groups and whose voice was drowned out amidst the cries of big government, big labor, and big business.”

In a Goldwater biography I authored, here is how I described the forgotten Americans of 1964:

They were little old ladies in tennis shoes, truck drivers with tattoos, professors who read Hayek rather than Keynes … retired people on Social Security worried about inflation … anti-communists demanding action against Cuba and Khrushchev, small businessmen fighting a losing battle against government rules and regulations … high school and college rebels looking for a cause—all of them believing that it was possible to solve problems as America had in the past, through the First Baptist Church and the Rotary and the Salvation Army and in their towns, cities, and communities without the direction of federal bureaucrats.

The incumbent Democrat, Lyndon Johnson, decisively defeated Goldwater in the general election, but he had laid the foundation for future campaigns based on the issues critical to Middle Americans.

Just four years later, Republican Richard Nixon won the presidency in 1968 by appealing to what he called a “Silent Majority” and their concerns over social issues ranging from crime and busing to drugs and welfare.

In his 1980 acceptance speech at the Republican National Convention, Ronald Reagan sought to bind together all the elements of the GOP while reaching out to independents and disillusioned Democrats by anchoring his administration-to-be to five little words that can be found in every Middle American’s dictionary: family, work, neighborhood, peace, and freedom.

Pollster Louis Harris later concluded that Reagan sailed to victory because evangelical conservatives, led by the Moral Majority with its 4 million members, “gave him such massive support.”

The direct line through Goldwater’s forgotten American, Nixon’s silent majority, and Reagan’s Moral Majority is clear—they are all part of a Middle American paradigm.

In 1992, this constituency demonstrated its political power in a different fashion when H. Ross Perot came closer to winning the presidency than any other third-party candidate in modern times.

Perot appealed to the same heartland as Donald Trump did a quarter of a century later, offering himself as an independent alternative to the moderate conservative Republican, President George H. W. Bush, and the moderate liberal Democrat, Gov. Bill Clinton of Arkansas.

By winning 19% of the popular vote, Perot signaled the coming political and cultural divide that would produce paper-thin victories for presidential candidates in 2000 and 2016.

In 2009, a supremely confident President Barack Obama dismissed warnings about a possible Middle American backlash and set in motion the “transformational change” he had promised, starting with a $787 billion economic stimulus package.

The Heritage Foundation’s description of the assembly could equally apply to a 1964 Goldwater rally:

One saw Middle America at its best. These were ordinary, hard-working people. They bought their own bus and plane tickets, paid their own hotel tabs, and made their own signs. Many came as families: parents, grandparents, and children … . They radiated good cheer among themselves and outrage toward their government. They were fed up with politicians squandering their taxes and appropriating powers not found in the Constitution.

The 2010 midterm elections pitted the liberal elite against Middle Americans, and the people prevailed. Republicans picked up 63 seats in the House, six seats in the Senate, and six governorships.

University of Virginia professor James Ceaser observes that, to tea partiers, the inflated size of government and the federal debt “represented not only a burden on future generations and a threat to American power, but also a violation of the spirit and letter of the Constitution.”

The core importance of the Constitution connects the tea party to the forgotten Americans remembered by Goldwater, Nixon, Reagan, and Trump.

At first glance, the results of the 2018 midterm elections seem to be a rejection of Middle America’s conservative ideas and a ringing endorsement of progressivism. The Democrats won a majority in the House, picking up 40 seats, while gaining seven governorships.

However, conservative Republicans picked up two Senate seats and elected governors in battleground states such as Florida and Ohio. The conservative Freedom Caucus in the House increased its numbers as well.

Middle Americans will continue to play a huge role in American politics and policymaking. Their values are based on a conservative canon: government should be limited and individuals should be free; lasting liberty requires civic virtue, both public and private; and peace is contingent on maintaining a strong national defense.

As Heritage Foundation President Kay C. James points out, the coronavirus crisis presents all of us with a unique opportunity.

Just imagine, she says, if all partisanship were put aside and Congress and the president worked together for the greater good of the American people who elected them to do just that.