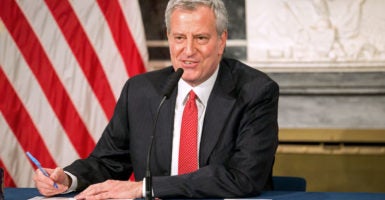 De Blasio and New York City Health Commissioner Oxiris Barbot took turns telling citizens in February and March that the virus was not as widespread as people thought. Data now show that the city is becoming the epicenter for the coronavirus, which has killed 883 New Yorkers.

De Blasio is getting some pushback. CNN’s Jake Tapper, for instance, asked the Democrat on Sunday if his unwillingness to publicly request New Yorkers pull back from New York’s nightlife is partly to “blame for how rapidly the virus has spread across the city?”

City officials were working with the information they had at the time, de Blasio responded, adding: “This was a very different world just a short time ago.” The New York mayor has spent weeks railing against what he believes is the president’s poor response to the virus.

“Here’s reality: This is a war-like situation,” de Blasio said in a March 14 interview with MSNBC’s Joy Reid. “We’re in a wartime scenario with a Mar-a-Lago attitude being used by the federal government,” he added, referencing Trump’s resort in Florida.

Here are five times de Blasio and Barbot downplayed the virus after the president announced in January restrictions on foreign nationals who have recently been to China from entering the U.S.

Barbot Tells Citizens Not to Miss Out on a Parade

“There is no reason not to take the subway, not to take the bus, not to go out to your favorite restaurant, and certainly not to miss the parade next Sunday.” Barbot said during a Feb. 2 press conference addressing the pandemic.

Barbot was referring to a New York Chinatown parade, which celebrates China’s New Year and took place on Feb. 9. Barbot appeared to suggest Trump’s travel restrictions were racist in a Feb. 2 tweet to her followers.

“I want to be clear, this is about a virus, not a group of people. There is NO excuse for anyone to discriminate or stigmatize people of Asian heritage. We are here today to urge all New Yorkers to continue to live their lives as usual,” she said.

As we gear up to celebrate the #LunarNewYear in NYC, I want to assure New Yorkers that there is no reason for anyone to change their holiday plans, avoid the subway, or certain parts of the city because of #coronavirus. pic.twitter.com/r4gNWklGPX

Barbot Suggests the Risks Are Minimal

Barbot argued in a local TV interview on Feb. 7 that the city is “telling New Yorkers, go about your lives, take the subway, go out, enjoy life.” She did say that citizens must practice good hygiene, but suggested the biggest threat comes from family members and not large packs of people.

“And so we know that this virus can be transmitted from one individual to another, but that it’s typically people who live together,” she said during the interview. “That there’s no risk at this point in time—we’re always learning more—about having it be transmitted in casual contact, right?”

The Center for Disease Control and Prevention recommended on March 15 that U.S. citizens inside the country not hold events with 50 or more people for the next eight weeks out of an abundance of caution. CDC suggested avoiding any large conferences, festivals, or parades.

“We want to encourage” New Yorkers going out, the mayor said during a Feb. 10 MSNBC broadcast.

“If you’re under 50 & you’re healthy, which is most NYers, there’s very little threat here. This disease, even if you were to get it, basically acts like a common cold or flu. And transmission is not that easy,” de Blasio said at the time.

“Since I’m encouraging New Yorkers to go on with your lives + get out on the town despite Coronavirus,” de Blasio told his Twitter followers on March 3, no more than two weeks before likening the outbreak to a type of world war that required nationalizing industries.

He offered some suggestions for what New Yorkers should do instead of social distancing. “I thought I would offer some suggestions. Here’s the first: thru Thurs 3/5 go see ‘The Traitor,’” de Blasio said, referring to a 2019 crime drama about the life and times of a Mafia mob boss.

“The Facts Are Reassuring,” De Blasio Says on March 2

“The facts are reassuring,” the New York mayor said during a March 2 press conference alongside New York Gov. Andrew Cuomo.

De Blasio added: “We have a lot of information now, information that is actually showing us things that should give us more reason to stay calm and go about our lives” normally.

The mayor’s office is pushing back against suggestions that de Blasio downplayed the problem.

“No one is taking this more seriously than our mayor and the people of this city. It’s inaccurate to suggest otherwise,” Freddi Goldstein, a spokesman in de Blasio’s office, told The Daily Caller News Foundation.