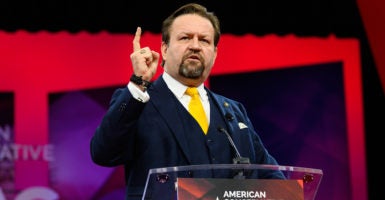 Young Americans are being taken captive by a political ideology that has failed over and over again. “America First” host and former White House aide Sebastian Gorka debunks some myths of socialism and challenges Americans to look honestly at its great lie. Read the transcript, posted below, or listen to the podcast:

Virginia Allen: I am joined by Sebastian Gorka, host of “America First.” Thank you so much for being here.

Sebastian Gorka: My pleasure. We love The Daily Signal and The Heritage Foundation.

Allen: Your love for freedom really starts with your father, Paul Gorka, and he has an amazing story, incredible history of actually escaping from very oppressive communist countries.

Today, we have a pressing issue in America of socialism.

Allen: So many people are fascinated with the idea of socialism. Where do you think that comes from?

Gorka: Oh, I can tell you very clearly. It’s the third chapter of my new book, “The War for American’s Soul.”

I went back, I mapped out how we got to a place in America where, according to the Victims of Communism Memorial Foundation, 72% of millennial Americans would prefer to live in a socialist or communist country.

This didn’t happen overnight, and it’s not just a function of the eight years of [former President Barack] Obama. This is 80 years of indoctrination.

It goes right back to an Italian communist in a prison cell in Italy called Antonio Gramsci and through to Saul Alinsky and the concept of the march through the institutions.

This is a very, very conscious ploy to undermine Western civilization from the inside.

The radicals of the ’60s and ’70s, the Weather Underground, the SDS [Students for a Democratic Society], people such as Bernardine Dohrn and Bill Ayers failed to instigate a violent Marxist revolution in America.

So what did they do? They knew their Trotsky, they knew their Mao, they even knew what Hitler said. “Give me their children and I will own their futures.”

This is how you get to a point in America where you can be doing a degree, you can be studying Western literature in an Ivy League school and never read William Shakespeare in your four years in college.

So we have several generations who’ve been indoctrinated, and the sad thing is the conservative movement allowed the left to capture the culture. That’s why we owe Andrew Breitbart so much, who woke us up to the reality that politics is downstream from culture, and now it’s time for us to reach out and grasp back our republic from those who wish to destroy it.

Allen: What would you say is the great lie of socialism?

Gorka: That it works. We have kids, we have [Sen. Bernie Sanders] supporters—Bernie Bros—people who like Sen. [Elizabeth Warren], people who like [Rep.] Alexandria Ocasio-Cortez, who actually believe that equity is guaranteed, that you can have outcomes, not opportunities, outcomes guaranteed without the loss of liberty.

Despite … two things that are documentable that Howard Zinn and Michael Moore will never tell you, or Noam Chomsky. Forty nations, four-zero, 40 nations have tried to create socialist or communist countries since Karl Marx wrote “Das Kapital.”

Every single one failed, and on top of that, whilst they tried to create earthbound utopia, they took the lives of 100 million people from the Soviet Union to Cambodia, from Laos to Cuba.

Read “The Black Book of Communism.” Listen, written by left wing, the historians who said in less than a hundred years, 100 million lives were extinguished. So the big lie is that socialism and communism can work.

Allen: Every day on “America First,” you push back against the progressive narrative of the left. How would you respond to the progressive talking point that liberals and progressives are really the only people that care about the poor or the disadvantaged?

Gorka: Because there is no system of governance that has taken more poverty, more millions and billions of destitute people out of poverty and given them prosperity than free markets and democracy.

Socialism never did it. Socialism sounds good. But eventually, as Margaret Thatcher says, “The only problem with socialism eventually is that you run out of other people’s money.” And eventually, the good intentions of a socialist state lead to the labor camps in the Gulag.

So the talking point is very simple. It’s never worked. It’s not going to work. And if you really want to help somebody, you’re going to have to go with free markets.

Allen: And how do free markets and a smaller government actually work to lift that lower class, that middle class?

That’s why you have to get government out of the way. I didn’t say it, but it’s a great phrase: The bigger the government, the smaller the citizen. …

When we came into the White House, I was a deputy for strategy to the president, and the president said, “I’m not signing any executive orders unless we rescind two standing orders. So for every new executive action, … we want to dissolve two.” And we said, “Wow, that’s amazing.”

You know what happened? By the ninth month, that ratio wasn’t 1-to-2. It was 1-to-22. We got government off the backs of American businesses, and what happened? This is stunning, $13 trillion was added to the U.S. economy.

Let’s not talk about emotions. Let’s talk about what you can actually see happening in the market.

Allen: Can you tell our listeners how they can find out more about what you’re doing and find your show?

Gorka: My show “America First” is on the Salem Radio Network, three hours a day, 3 to 6 Eastern. You can pick it up on 200 stations across the country, or we’re live streaming on YouTube, on Facebook.

You can download the podcast at your favorite podcasts supplier. Or we cycle it 24/7 at our website sebgorka.com. …

Allen: Perfect. Sebastian Gorka, thank you so much.

Gorka: God bless. Thank you. That was great.