Massive US Military Exercise in Europe Is Still a Go, Despite Travel Restrictions 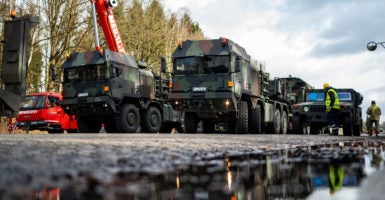 Vehicles of the U.S. Army and the German Federal Armed Forces are parked on a loading area during the Defender-Europe 20 exercise Feb. 12, 2020, in Bergen, Germany. (Photo: Philipp Schulze/Picture Alliance via Getty Images)

KYIV, Ukraine—Due to the coronavirus pandemic, the U.S. military has plans to scale back, but not cancel, its biggest military exercise in Europe in 25 years.

Some 20,000 U.S. troops were slated to deploy to Europe and back this spring for the Defender-Europe 20 exercise, which was to last through May and take place in 10 European countries.

U.S. European Command said on Thursday that “in light of the current coronavirus outbreak” it was “reducing” the number of U.S. participants in Defender-Europe 20.

“We take the Coronavirus outbreak seriously and are confident that by making this important decision we’ll continue to do our part to prevent the further spread of the virus,” U.S. European Command officials said in a statement.

That announcement followed President Donald Trump’s Wednesday address to the nation in which he announced restrictions on travel from Europe in a bid to limit the spread of COVID-19, the disease caused by the novel coronavirus.

“We can always do another Defender. Right now public health concerns ought to take priority,” said James Jay Carafano, vice president for The Heritage Foundation’s Davis Institute for National Security and Foreign Policy.

As of Friday, the Pentagon had not yet specified the revised number of U.S. participants in Defender-Europe 20.

However, Europe is now registering more new coronavirus cases than any other global region, raising concerns about the wisdom of going forward with the exercise, albeit on a smaller scale than originally planned.

“The virus is the culprit. Leaders must take prudent action now to preserve the force structure required to respond to a crisis should we need to,” said John Venable, senior research fellow for defense policy at The Heritage Foundation.

“Without an exercise, we could still deploy to fight,” Venable told The Daily Signal. “It would be ugly, but we could make it happen. We need to exercise that process but … we can always do it another time.”

Defender-Europe 20 is a unique chance for the U.S. military to practice the logistical challenge of deploying a large force to Europe—and then bringing everything and everyone home.

According to a U.S. military statement, the exercise’s overarching objective is to “validate” America’s ability to deploy personnel and equipment to Europe, as well as “to test the national support of hosting nations.”

The American forces scheduled to deploy to Europe this spring comprise units from 15 U.S. states. An additional 9,000 American military personnel already stationed in Europe were to participate in Defender-Europe 20, as well as 8,000 troops from other allied nations.

“Nothing has been lost,” Carafano said of the possibility of the exercise’s cancellation. “Even the planning to this point is something to build on.”

The first coronavirus case among U.S. military personnel in Europe was announced on March 6—a sailor stationed in Naples, Italy, reportedly tested positive for the disease.

On Wednesday, the Pentagon announced that Norwegian officials had canceled a military exercise called Exercise Cold Response 20, in which the U.S. was also a participant.

According to a U.S. European Command press release, the decision was “a precautionary measure in response to the ongoing outbreak of COVID-19 and to protect the health and safety of all participants and local population.”

After a generational focus on counterinsurgency warfare in the Middle East and Afghanistan, U.S. armed forces are spinning up for a new era of conventional threats from other nations.

While U.S. military planners didn’t call out Russia by name, exercises like Defender-Europe 20 are clearly meant to show Moscow that the U.S. is willing and able to defend its European allies by force.

The program called for a buildup of U.S. military forces and equipment in Eastern and Central Europe, as well as rotating military exercises throughout the region.

Totaling roughly $1 billion in 2014, the ERI was meant to be a temporary measure to deter Russia from military provocations and show NATO and its European partners that the U.S. was committed to their defense.

However, since taking office, the Trump administration has boosted spending for the Obama-era program, now known as the European Deterrence Initiative, underscoring that the Russian threat to NATO and its European partners has not dimmed since 2014.

With about $6 billion pledged for the program in fiscal year 2020, the number of American troops scheduled to rotate in and out of Europe was set to ratchet up this year.

“This exercise is not a one-off,” Heritage’s Carafano said of Defender-Europe 20. “This will be the new normal. The U.S. has to demonstrate it can reinforce Europe quickly. It’s a key component of conventional deterrence.”