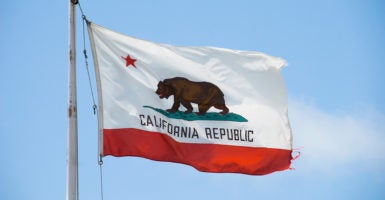 California recently passed a law that cracks down on the gig economy. (Photo: Alex Reitter/EyeEm/Getty Images)

She persuaded California’s legislature to pass a new law reclassifying freelance workers as employees. That means many people who hire them must now give them benefits like overtime, unemployment insurance, etc. Politicians said it would help freelancers a lot.

Of course, much of the media agreed. Vox called it “a victory for workers everywhere.”

Actually, more understand now, because they got a very personal lesson. Once the bill passed, Vox media cut hundreds of freelance writing jobs.

When Gonzalez was asked if she felt bad about that, she sneered, those weren’t “real jobs.”

“You’re thinking you’re helping us, but you’re not,” says musician Ari Herstand in my new video. He says the anti-gig work law could “crash the California music economy.”

Why? Before the law passed, if he played a gig where he’d hire a drummer, bassist, and guitar player, “I just cut [each] a check for $200. Now, I have to take that drummer, put him on payroll, W-2 him, get workers’ comp insurance, unemployment insurance. I have to pay payroll taxes. I also have to now hire a payroll company.”

All to hire musicians for one just night. The paperwork alone might cost more than the music.

But now many ride-share drivers are upset because the law takes away their freedom.

“I liked being independent!” said one. “I don’t want a boss to tell me when or where to drive.”

Herstand says Uber and Lyft drivers would often tell him: “I’m a photographer and this is my fourth side gig. I want to do this when I want to do this, and if now I’m an employee, and I’m W-2’d, they’re going to dictate my hours. I don’t want that. [The law is] preventing us from doing what we want to do.”

The law upset independent truck drivers, too. After some nosily drove big rigs in front of the legislature, they got an exemption from the law. Other politically connected professions, like lawyers and realtors, got exemptions as well.

Now Herstand’s working on getting an exemption for musicians, too.

“Why is that good law?” I asked him. “An exception for whoever is clever enough to get to the politicians?”

“It’s definitely not the solution,” laughed Herstand. “‘Write us out of this law and help us out? Here’s money for your next campaign.’ No, that doesn’t seem like that’s a way to legislate.”

But that’s how it’s often done. The more rules politicians pass, the more money they extract from people who are regulated.

Now other politicians want to copy California’s law. New York, New Jersey, and Illinois have their own versions of gig economy bills. The House of Representatives wants to nationalize the law. And, this week, former Vice President Joe Biden cluelessly said such a law “will give workers the dignity they deserve.”

Democrats do what unions ask them to do. Politico points out that just a few years ago, New York Gov. Andrew Cuomo called gig work “a great service for people, giving people jobs. I don’t think government should be in the business of trying to restrict job growth.” He even joked that Uber drivers might earn more than he does.

But now he wants to outlaw most gig work and calls it “exploitive, abusive!”

It’s no surprise that Gonzalez’s biggest political donors are unions. She talks a lot about “protecting our union jobs.” But now that her bill is killing jobs, she wouldn’t agree to an interview.

Neither would the California unions, or any of 75 law professors, political scientists, sociologists, etc., who published a letter in support of the law.

Herstand says that’s because the law now embarrasses its supporters, but politicians won’t repeal it because “no politician ever wants to admit they did something wrong.”