Andrew Cuomo Is Wrong. The Gig Economy Isn’t Like a Sweatshop at All. 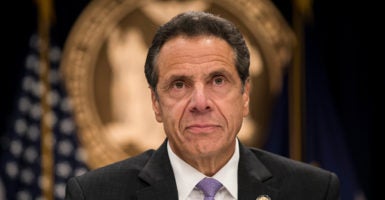 In his State of the State address on Jan. 8, New York Gov. Andrew Cuomo likened 21st-century gig-economy corporations to late 18th- and early 19th-century sweatshops, the latter characterized as such for their poor working conditions, exploitation of workers, and violations of labor laws.

By asserting that entirely optional gig and contract-based work “is exploitive, abusive, it’s a scam, it’s a fraud,” Cuomo displayed a thorough lack of understanding of the gig economy and independent workers.

For starters, there are no corporate factories in the gig economy, and aside from some more strenuous “task rabbit”-type jobs, very few gig workers break a sweat.

“Exploitive”? Independent work is entirely at will. Individuals choose what jobs they want to perform, what hours they want to work, and they have wide latitude in how to accomplish their jobs.

“Abusive”? Sweatshops imposed harsh conditions on workers, even locking them in unsafe buildings and preventing them from leaving. The essence of independent work is that there is no factory or corporate job site. Independent workers use their own property, or they contract with a client to determine their job site.

A “scam”? Sweatshops often withheld workers’ wages, and some were even implicated in human trafficking scams. Most independent workers get paid more quickly than formal employees, who typically collect biweekly or semimonthly paychecks.

Contractors typically get paid within a week of when their work is completed. Most temporary-help agencies pay weekly. Uber drivers get paid every week, and Etsy sellers receive payment within one to three days of a sale. Gig platforms typically provide payment records that can be easily accessed from participants’ smartphones.

A “fraud”? There’s nothing fake, nor phony, about an estimated one out of every three workers in the U.S. participating in independent work, about the additional income and opportunities gig and contract work generates, about the value workers place on the flexibility and autonomy it provides, or about the convenience and value it delivers to individuals and families across the U.S. who purchase goods and services that would otherwise be inaccessible.

It doesn’t appear that any of Cuomo’s disparaging adjectives apply to independent work in the modern economy. Nor does his likening it to sweatshops hold true.

According to the Department of Labor, the definition of a sweatshop is a factory that violates two or more U.S. labor laws.

The gig economy and contract-based employment at-large aren’t violating any labor laws. It’s just that Cuomo, along with unions and the lawmakers they support, wants to make them illegal.

In his address, Cuomo said of contract and gig-based employment that “it must stop, and it has to stop here and now.”

Such calls to end gig and contract-based work are founded in the paternalistic presumption that workers are better off working for a boss than for themselves, and that politicians’ prescribed “protections” are more beneficial than the autonomy and flexibility independent workers value.

Independent workers disagree. According to the Bureau of Labor Statistics, “Fewer than 1 in 10 independent contractors would prefer a traditional work arrangement.” And the average Uber driver wouldn’t work at all if they had to commit to a traditional taxicab employment arrangement.

There are many reasons for those preferences, as independent workers represent a diverse group of individuals such as:

Wiping out opportunities for all these workers in a misguided effort to provide “protections” to a minority of independent workers who lament not having formal employment arrangements is not the solution.

If some customers who shop at Food Lion complain that it doesn’t provide all the organic products they want, the solution is for them to shop at Whole Foods instead. It’s not for the federal government to require that Food Lion replace its non-organic products with organic versions.

Fortunately, in today’s strong labor market, with record low unemployment and more job openings than there are people looking for jobs, individuals who are not content with gig-economy or contract-based jobs have lots of opportunities for formal employment.

Government interventions that try to provide workers with more “protections”—such as those of Obamacare and other employer mandates that kick in as companies employ more workers and provide them more hours—end up costing as much or more in lost jobs and incomes as they add in new “protections.”

A better alternative than mandates is for independent workers to join organizations, such as the Freelancers Union, that pool workers to offer lower-cost health and disability insurance that formal employment provides.

A New York politician once argued in favor of Uber: “[I]t’s offering a great service for people, and it’s giving people jobs. I don’t think government should be in the business of trying to restrict job growth.”

That politician pointed out that “if you try to say we are going to cap your job growth here, they’ll go next door and grow their jobs.”

Ironically, those statements came from Cuomo back in 2015, when he was criticizing New York Mayor Bill de Blasio for imposing limits on Uber.

Cuomo was right when he characterized Uber as “one of these great inventions, startups, of this new economy,” but he is absurdly wrong when he refers to it and other gig-economy and contract jobs now as “sweatshops.”