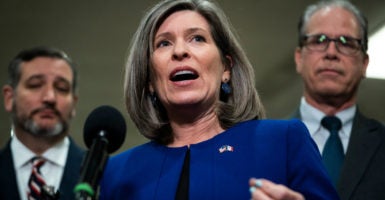 "All you have to do is look around this world and see where socialism has failed and how people that live in those countries so long to be free," says Sen. Joni Ernst, pictured in January. (Photo: Drew Angerer/Getty Images)

In 1989, Sen. Joni Ernst, R-Iowa, traveled to the Soviet Union. What she saw and heard during her time there influenced her, as she discusses in today’s podcast. Read the lightly edited interview, posted below, or listen on the podcast:

Rachel del Guidice: We’re joined today on The Daily Signal Podcast by Sen. Joni Ernst of Iowa. Sen. Ernst, thank you so much for being with us today.

Sen. Joni Ernst: Thanks, Rachel. Great to be here.

del Guidice: We’re here live at CPAC [the Conservative Political Action Conference] in National Harbor, Maryland, and during this conference you’re talking about one of the things that you’re passionate about, which is socialism versus the American dream. You have your own … personal story about this; can you share that with us?

Ernst: I sure do. When I was at Iowa State University during the summer between my freshman and sophomore year, I had the opportunity to attend an Ag exchange in the Soviet Union.

And so, I was with a family in the Soviet Union living on a collective farm and was able to get to know the host family, the members of the community.

There were a number of us Iowa students that were there. … We got together in the evening, and [were] just going through the experience of living on that collective and how they lived. No running water, no refrigeration, no telephone, no automobile. They shared one bicycle in the whole family.

But in the evening the community members had the opportunity to get together with us students and they would ask questions. And the first thing they asked was, “What is it like to be an American?”

I mean, they hungered for the freedoms that we have in the United States. So for those that are seeking socialism, I would say all you have to do is look around this world and see where socialism has failed and how people that live in those countries so long to be free.

del Guidice: We see it. You mentioned how socialism is being pushed as a viable way to govern. And we even see Alexandria Ocasio-Cortez in the House, she’s pushing socialist policies a lot.

Ernst: Right. And free, free, free. And we all understand that free, when they are talking about free, it doesn’t really mean free. …

It means quality of care will go down. The length of waiting times will shoot far out there. Folks will be waiting for procedures. It’s rationed care.

If that’s what they think is great, well, by all means, you can move to other countries and get rationed care. But that’s not how we operate here in the United States.

I would say the same of any other free opportunity that exists out there. They really need to scrutinize it and understand, one, it’s not free. It comes at significant cost. But then the quality and the type of care goes down.

del Guidice: Well, you and your colleague, Sen. Marsha Blackburn of Tennessee, you two are the first Republican women on the Judiciary Committee. What has that experience been like?

Ernst: Oh, it’s been wonderful. Absolutely wonderful. And I cannot believe that Marsha and I are the first Republican women to serve on the Judiciary Committee. Long, long time overdue. But it has been a really great experience. I would say probably for Marsha as well.

But to be able to sit on that committee, to work on the types of issues that are coming before that committee—and it’s not just about confirming judges, which is pretty extraordinary, but it is also about looking at different patent issues, intellectual property issues, looking at issues like abortion.

We’ve talked about so many things on that committee that I think are really important and it’s a very good thing that conservative women have their eyes on these issues as well and input.

del Guidice: Something that you’re passionate about is immigration reform and you have a piece of legislation called Sarah’s Law. Can you tell us about that and especially the story behind this legislation?

Ernst: Yes, absolutely. … I’ll start with a story and work into the legislation.

Sarah Root was a beautiful young woman from Council Bluffs, Iowa, and she had just graduated from college—4.0 student, promising future. She had just graduated and the evening of her graduation she was struck and killed by a man who was driving a car three times over the legal limit.

He was drunk and he was an illegal alien. He came into the country, he was arrested, taken to prison, but he was released. ICE [Immigration and Customs Enforcement] did not detain him.

What my bill would do is force ICE and the local authorities to work together and they would detain any illegal immigrant who has caused bodily injury or death to an American citizen.

Sarah’s family, her mother, Michelle Root; and her father, Scott Root; will likely never see justice because he wasn’t detained by ICE.

Something else, recent developments in the Senate. The Senate recently voted to defeat one bill that would provide medical care for babies who survive abortion and then another bill that would have prohibited late-term abortions. What are your thoughts on the Senate not being able to pass both of these pieces of legislation?

Ernst: I am so disheartened, Rachel. I am disheartened that the Democrats have gone so far on the abortion issue.

The first bill, the Born-Alive Abortion Survivors [Protection Act] is a bill that was introduced by [Sen.] Ben Sasse. I’m an original co-sponsor of that bill. And that would require a physician to provide the same lifesaving services that they would provide to any other baby born at the same gestational age.

And we are not talking about abortion bribes, a woman’s right to choose. We’re not talking about any of that stuff. This is about a baby who is lying before us on a hospital table. That is a baby separate from the womb, separate from the mother. It is a baby. And all we are saying is that that baby should require medical attention, be given to it, just as any other baby would.

Unfortunately, the Democrats blocked that.

The pain-capable baby is a baby at 20 weeks of gestational age or older. And this bill [the Pain-Capable Unborn Child Protection Act] was introduced by Sen. Lindsey Graham. Again, I’m an original co-sponsor on this.

We are 1 of 7 nations that allows late-term abortions and amongst those nations: Russia, China, North Korea—all horrible human rights violators, not good company to be in. And we need to reconsider that. But again, Democrats have gone so very far. They’re out of step even with their own party on that issue.