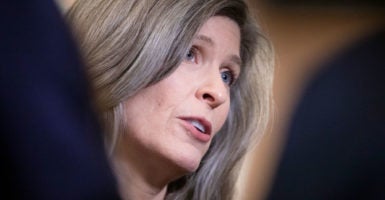 "What is it like to be an American, and what is it like to be free?": Sen. Joni Ernst, R-Iowa, says that's what residents of the Soviet Union asked her years ago. Pictured: Ernst speaks with reporters Feb. 3 during a Senate recess. (Photo: Samuel Corum/Getty Images)

A pair of female Republican senators shared eye-opening, firsthand encounters with authoritarianism and socialism in their travels abroad—including grinding poverty and lack of freedom—for an appreciative audience Thursday at the annual Conservative Political Action Conference.

The theme of this year’s gathering of conservative activists is “America vs. Socialism,” which many of the speakers—including Sens. Joni Ernst of Iowa and Marsha Blackburn of Tennessee—incorporated into their presentations.

Ernst said that when she was in college about 30 years ago, she had the opportunity to participate in an agricultural exchange program in what was then the Soviet Union.

“My [host] family had no running water,” Ernst said of her experience, adding:

They farmed with horses and wagons, and had no refrigerator. They had no automobiles, and they shared one bicycle among the whole family. That is socialism—living in poverty.

They hungered for the opportunity and freedoms that we have as a country.

Blackburn spoke of conversations she had with women in “a bombed-out shell of a building” in Mosul, Iraq, in 2003.

“Us from D.C. were the first free women that these individuals had a chance to meet,” Blackburn said, adding:

You’re able to see the impact of how socialist and dictatorial policies tear down countries.

“The things I fight for every day I call the Big Five,” said Blackburn, 67, a former House member who was elected to the Senate in 2018. “They are faith, family, freedom, hope, and opportunity. I want my family to be able to live in a free society and live out their version of the American dream.”

Ernst, 49, was elected to the Senate in 2014 after retiring as an Army lieutenant colonel following a 23-year military career. She agreed that values are a crucial aspect of the battle against socialism.

“I wish that more folks could understand that socialism brings detriment to every country it touches,” Ernst said. “I have been in arguments with people in Iowa over what are true American values, which are up against socialism.”

“Socialism allows the government to choose winners and losers,” Blackburn said, adding: “We want a level playing field so that individuals with a can-do attitude can get up and go achieve their dreams.”

Female genital mutilation “is a human rights violation coming from other countries,” Ernst said. “This is not what the United States stands for, but the left has allowed this ideology to enter America. We should be protecting the most vulnerable among us.”