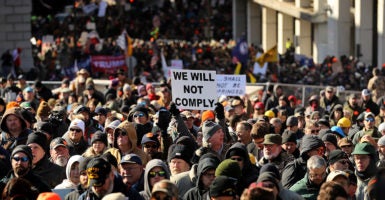 Why are wealthy left-wing donors across the country, the abortion industry, and national gun control groups more interested in your local school board and city council races than most of the people who live in your own town?

Because they’re funding efforts to ensure their far-left agenda pervades our entire society—from getting their abortion curricula into our schools to changing our election laws—and they want to make sure that no city, no town is left to stand against them.

National left-wing organizations are collecting and funneling hundreds of millions of dollars to flip local city councils, school boards, and county prosecutors’ offices to the left. They are flooding small elections with big money, and it’s giving them unprecedented influence over our local affairs and greater access to our children.

We’re witnessing the election of leftist local prosecutors who are refusing to prosecute whole classes of crimes. Rather than working with their state legislatures or city councils to reform the criminal justice system the right way, they are choosing to ignore the laws they took oaths to uphold and are single-handedly nullifying laws they don’t like.

Prosecutors who promise leniency have won races across the country, including in Philadelphia and Chicago, cities with two of the highest crime rates in the nation. Their campaigns have been supported by wealthy out-of-state billionaires, one of whom spent millions just last November backing candidates in several Virginia counties.

Newsweek reported on one teacher training session that included a talk on “white privilege” that asserted: “Even when minorities express or practice prejudice against whites, they are not racists.”

National abortion groups have donated millions to elect state and local candidates who vow to weaken abortion laws and give the abortion industry access to our schools. Those groups use their influence to get officials to adopt their sex education curriculum in local schools. One group even created high school “clubs” where it trains students in abortion activism.

Another part of the takeover agenda is gun control. In last fall’s Virginia elections, one anti-Second Amendment group spent $2.5 million to elect gun control advocates to the Virginia General Assembly. It was the largest out-of-state spender in Virginia’s elections, and its candidates have helped push the unprecedented gun control legislation we’re now seeing.

These far-left groups aren’t going to stop, and they have the money and the people on the ground to insert themselves in communities across the country. Fighting them is going to require local citizens working together, and national organizations such as The Heritage Foundation and others working to expose them.

We’ve all heard the story when, as he was leaving the Constitutional Convention, Benjamin Franklin was asked whether America had ended up with a republic or a monarchy. He replied, “A republic—if you can keep it.”

The same character and sacrifice that were required to found this republic are now desperately needed to keep her.

Our Founders pledged their lives, their fortunes, and their sacred honor to the cause of a free nation. We must do the same.

Fortunately, we don’t have to die for this cause, but we do have to give our lives in the sense that we must dedicate our time and a portion of our treasure to defending this nation—community by community—against those who would destroy it from within.

That means calling and writing your elected officials about proposed legislation, attending city council and school board meetings to prevent them from adopting these agendas, and volunteering for and giving money to candidates who will forward limited government, free market principles, and traditional American values. Then we must multiply our voices by getting 10 of our like-minded friends registered to vote and to turn out on Election Day.

Conservatives must do more than complain. We must be willing to stand up and fight. We must engage in the battle, otherwise, we will cede the battlefield and, ultimately, our country.

I don’t want to leave my children and my grandchildren an America that’s less free than the one I inherited. Protecting our hard-fought American way of life is one of the greatest gifts we can pass on to the next generation.