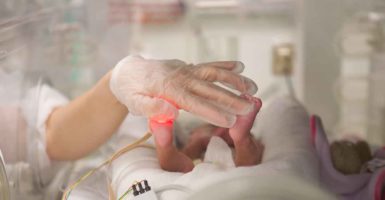 In a setback to pro-life activists, the Senate on Tuesday defeated one bill that would require medical care for babies who survive abortion and another that would prohibit late-term abortions. Only three Democrats voted to protect abortion survivors.

“This body ought to be able to stand 100 to zero against that barbarism,” Sen. Ben Sasse, R-Neb., said in a floor speech before the Senate votes, referring to allowing the survivors of botched abortions to die.

“It’s inhumane and it’s passive infanticide, and the Senate should today condemn and prohibit that practice,” Sasse said.

Almost all Democrats, however, voted against the two bills.

The Born-Alive Abortion Survivors Protection Act, which failed 56-41, would have required proper medical care for infants who survive abortion and set criminal consequences for health care providers who violate the law.

The Pain-Capable Unborn Child Protection Act, which failed 53-44, would have prohibited abortions after 20 weeks. Proponents say the legislation is long overdue, noting that the United States is one of only seven countries, including China and North Korea, that allow abortions after the 20-week mark.

Sen. Susan Collins, R-Maine, was the only Republican to vote no on the 20-week ban.

Casey and Manchin were the only Democrats to vote yes.

Republicans, who hold 53 seats in the Senate, failed to reach the 60-vote supermajority they needed to advance the bills. Democrats hold 45 seats, and independents who caucus with them hold two.

In a recent commentary, Melanie Israel, a research associate in The Heritage Foundation’s DeVos Center for Religion and Civil Society, argues that the two pieces of legislation shouldn’t be controversial.

“Treating a baby born after an attempted abortion with the same care provided to any other newborn should not be controversial in a civilized society,” Israel wrote, adding:

Knowing that the vast majority of Americans support federal abortion policy that is far more restrictive than the status quo, you would think that Congress could agree that the Pain-Capable bill would be a practical policy to reflect our nationwide consensus. But every time the bill has received a vote in the Senate, it has failed to amass the 60 votes necessary to proceed.