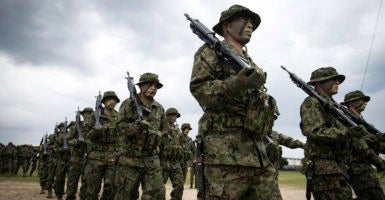 Since returning as prime minister of Japan in 2012, Shinzo Abe has fulfilled long-standing promises to develop new military capabilities and expand its security role in the region and globally. Abe has enacted an impressive list of national security initiatives and has overseen a moderate increase in the country’s defense budget.

Japan took a step toward demonstrating some of these new capabilities recently when its new Amphibious Rapid Deployment Brigade engaged in joint military exercises with the U.S. Marine Corps to hone skills for defending against Chinese attacks on its remote islands.

For years, China was the 800-pound dragon in the room, but increased assertiveness by Beijing, a heightened threat of aerial and maritime incursions into Japanese territory, and other escalating military capabilities has alarmed the Abe administration and provoked this response.

As for China, Japanese Defense Minister Taro Kono said Beijing has increased its defense budget approximately forty-eightfold over the past three decades, is now approximately four times larger than Japan’s military, and plans to use that might to change the status quo in the East China Sea. Chinese government ships enter the Japanese contiguous zone around the Senkaku Islands “almost every day and violate its territorial waters three times a month,” Kono said.

Chinese strategy is to intimidate other nations as it presses its expansionist sovereignty claims and “keep U.S. military forces out of the Indo-Pacific region during peacetime and crisis periods as well as to deny U.S. forces from conducting free and unimpeded military operations against China.”

In recent years, it has increasingly emphasized moving away from static defenses to more dynamic and rapidly deployable joint military forces.

To counter the Chinese threat to its remote southwest islands, Tokyo has acquired new capabilities, built new facilities, deployed new units and augmented others, and changed its strategy to better monitor and deter Chinese incursions and, if necessary, retake islands.

Although the brigade is tasked with amphibious operations, it is not capable of fighting far from home as U.S. Marines can, nor does it possess the land, air, and naval assets to operate as a Marine Air Ground Task Force. The brigade is reliant on Japan’s Maritime and Air Self Defense Forces, which do not have the equipment to rapidly transport the brigade.

Debating While the House Burns. Japan’s post-war security framework of heated debate and excruciatingly slow adoption of less restrictive constraints has not kept up with faster-moving regional threats.

Each incremental step is immensely controversial both domestically and with Japan’s immediate neighbors, who present the smallest change as portending a dangerous resurrection of Japanese militarism, expansionism, invasions, and quest for regional dominance.

Japan passed several security revisions that allow the country to take on more responsibilities, but doubts remain about the extent of implementation. As one U.S. defense expert put it, these revisions “opened the door for Japan, but will it choose to walk through it?”

Japan has procured an impressive array of sophisticated weapons, but U.S. officials and experts point to deficiencies in command and control systems and an ability to conduct joint and combined operations.

The military remains largely stove-piped with insufficient ability to communicate, plan, or operate across services. This has led to habitual frustration for U.S. alliance managers. The Heritage Foundation will address these and other issues in a forthcoming research report on the U.S.-Japan security relationship.