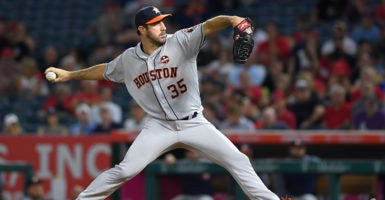 MLB seems to be hoping that because the Astros ultimately outed all the bad actors, they will now suddenly play by the rules. But accountability does not work that way. Pictured: Houston Astros' Justin Verlander throws at Angel Stadium in Anaheim, California, Sept. 12, 2017. (Photo: Kevin Sullivan/Digital First Media/Orange County Register/Getty Images)

Nothing creates a moral hazard more than exposing corruption and yet failing to punish those responsible. That’s what happened in the aftermath of the financial crisis of 2008, and that’s what’s happening in baseball today.

The rationale for failing to punish Wall Street corruption in 2008 was that big banks were “too big to fail” and had to be propped up—executive bonuses and all—to save the world economy.

The rationale in professional baseball in the aftermath of the Houston Astros’ sign-stealing scandal is that by fully exposing the scandal and holding those responsible accountable, baseball risks losing credibility and popularity.

The moral hazard here is that sweeping the problem under the rug with no accountability—as Commissioner Rob Manfred seems hell-bent on doing—provides zero incentives for teams to play fair and creates the risk that the next cheating scandal will be more destructive.

And because the problem has been neither fully brought to light nor appropriately resolved, it creates a deep sense of uncertainty among teams now heading into spring training. This lack of trust on the part of the players that the rules will be fairly and competently enforced puts them in a woefully precarious position.

First, pitchers and catchers will have a difficult time preparing for the season because their reviews of their own past performance cannot be relied upon.

They won’t know, for example, whether their pitches were hit or intentionally fouled because of the quality of the pitch or the change-up called, or whether the opposing team had advance knowledge of their intended throw. For most professionals, this level of uncertainty is frustrating—and wildly distracting.

Secondly, and with even more impact, more teams, believing there is very little downside consequence for being caught cheating, may start to employ their own version of electronic sign stealing, believing it necessary to maintain a competitive edge.

As with steroids in bodybuilding—or, for that, measure in baseball—after the governing bodies of the sports failed to effectively regulate the use of illicit substances, even players who were inclined to play by the rules found themselves falling behind the competition and decided, “If you can’t beat ’em, why not join ’em?”

Such is the nature of the drama that brought us the asterisked careers of Barry Bonds and Lance Armstrong. They believed in moral relativism; they argued that they should not have been penalized just because they were able to cheat better than the rest of the field, most of whom were also using banned substances.

But there is a distinct difference here. While Bonds and Armstrong suffered severe damage to their legacies and reputations, the Houston Astros have neither shown the slightest degree of contrition nor apologized for their cheating. It is almost as if despite being caught, they still got away with it.

The reason why MLB decided not to hold the Astros accountable for their misdeeds by stripping the team of its 2017 World Series championship seems all the more craven in retrospect.

One suspects that everyone involved knows that Astros players and managers were not the only ones involved in sign-stealing operations. Other teams did it, too, but were less effective. In essence, it could not definitively say that but for the Astros’ cheating, they would have lost the series.

MLB seems to be hoping that because the Astros ultimately outed all the bad actors, they will now suddenly play by the rules. But accountability does not work that way. The mere admission of wrongdoing is not tantamount to punishment. If only shaming the rule-breaker were enough to overcome the other competing incentives—namely, the insane amount of money that a winning franchise stands to earn. Money dwarfs all other concerns.

Athletes across the world of sports feel demeaned, not by the cheating itself, which is a part of sports, but by baseball leadership’s failure to effectively address the problem.

Deep feelings of hurt transcend baseball and extend to all professional sports. NBA star LeBron James took to Twitter to call out Manfred by name, imploring him to fix the issue.

“Listen I know I don’t play baseball, but I am in Sports,” he complained, “and I know if someone cheated me out of winning the title and I found out about it I would be f—ing irate! I mean like uncontrollable about what I would/could do! Listen here baseball commissioner listen to your players speaking today about how disgusted, mad, hurt, broken, etc. etc. about this. … Literally the ball is in your court(or should I say field) and you need to fix this for the sake of Sports!”