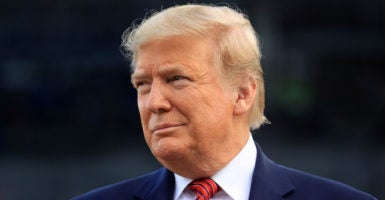 There are a lot of ways for the White House to get good advice, and President Donald Trump actually may be better than most presidents when it comes to gathering information for decision-making. Pictured: Trump at Daytona International Speedway Feb. 16, 2020, in Daytona Beach, Florida. (Photo: Chris Graythen/Getty Images)

No question, President Donald Trump is an unconventional statesman. On the global stage he looks like a fullback at a field hockey match.

Different doesn’t always mean wrong—except to the critics who have gone to absurd lengths to weaponize policy differences to undermine the legitimacy of the president’s decisions.

One of the most extreme and wrongheaded complaints is that this administration has violated how policy must be made. Critics complain the president seems to have a mind of his own and the audacity to not reflexively implement the recommendations the bureaucracy cranks out.

Nonsense. Not only is it wrong to suggest the White House must follow only the policy proposals its “experts” devise, it can at times be the worse step a president can take.

It is risky business for the Oval Office to make policy in a vacuum. But there are a lot of ways for the White House to get good advice, and Trump actually may be better than most presidents when it comes to gathering information for decision-making.

The establishment of the National Security Council facilitated a more systematic process for developing and making recommendations to the president.

Department representatives and National Security Council staff members would get together to hash out proposals and pass them to a deputies committee that included high-ranking department officials. These committees would, in turn, pass along their thinking to “principles committees” made up of Cabinet-level officials, who would, in turn, make recommendations to the president.

Every president has had his own version of a national security policy-making process. The process isn’t codified in law and rarely looks like the flow chart in textbooks—just as the way Congress crafts legislation often doesn’t match what students are told in their civics lessons.

These advisers and this process are meant to help the president make decisions; not to put him in a straitjacket that allows the bureaucracy to hold the president’s policies hostage.

There are crucial, important moments in history when president’s ignored the “best” advice and did the right thing. Harry Truman recognized Israel against the recommendations of his Cabinet. JFK made all the tough calls in the Cuban Missile Crisis. Ronald Reagan turned down Mikhail Gorbachev’s deal at Reykjavik. And all three emerged with better outcomes.

There also are instances where presidents went it alone and came to regret their decisions. President Jimmy Carter announced he was going to pull U.S. troops out of South Korea—only to find almost no one in Washington, not even his own secretary of defense, was willing to go along. Reagan turned over Iran-Contra to a few staffers in the National Security Council—and that didn’t end well.

Decision-making at the top is at least as important as bottom-up deliberations, particularly when the bureaucracy isn’t delivering good policy options. That said, making decisions in the isolation of the Oval Office can result in ghastly groupthink that’s no better than the mind-numbing same old, same old the agencies often crank out.

Smart presidents will shake things up and seek outside advice. FDR famously ranged far and wide for recommendations during World War II, consulting everyone from columnists to heads of state. Trump is more in the FDR mode; he likes to hear lots of opinions. Also like FDR, he is very much the decider-in-chief.

This is how Trump has chosen to run his presidency.

Those who don’t like it can vote him out. But it’s wrong to suggest the president is not legitimate or responsible because he doesn’t govern the way critics prefer.