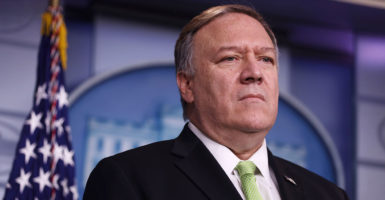 It sounds like an episode of “The Americans” or a best-selling Tom Clancy novel. But when Secretary of State Mike Pompeo looked into the faces of 40 governors and warned them that China had infiltrated their states, he wasn’t kidding.

They’re hiding in the shadows of our schools, our lobbying meetings, even our business dinners. And no one, he said evenly, knows it’s happening.

“These aren’t hypotheticals,” Pompeo insisted. “We’ve allowed this to continue without a deep awareness from the American people.”

And what is “this,” exactly? According to top State Department officials, we’re talking about a massive network of Chinese communists fanned out across the country with one goal: penetrate U.S. security, education, and financial systems—then, create chaos.

“It’s happening in your state,” Pompeo insisted, “with consequences for our foreign policy, for the citizens who reside in your states, and indeed for each of you … The Chinese government has been methodical in the way it’s analyzed our system … It’s assessed our vulnerabilities, and it’s decided to exploit our freedoms to gain advantage over us at the federal level, the state level, and the local level.”

These are often Chinese diplomats, the secretary explained on “Washington Watch,” initiating these operations. Men and women, serving here in the United States, who are quietly “leading and executing programs that present a risk to American businesses, to Americans’ privacy, and to Americans’ … security.” And the worst thing about it, he said, is it’s not “on people’s radar screens.”

“It’s one thing to pressure the secretary of state of the United States of America.” It’s quite another “to go after a high school principal,” Pompeo argued. “It shows depth. It shows systematization. It shows intent.”

Obviously, the secretary pointed out, “we want Chinese students coming here to learn.” But the reality is, these aren’t always groups with benevolent intentions.

Our communities are partnering with education associations, not realizing they’re actually “controlled and directed by the Chinese Communist Party.” We think they’re coming here to teach Mandarin, when in fact, they’re deeply tied to the regime and its sinister ambitions.

And those relationships are paying off. The Chinese, he warns, have quietly built a foothold with local school boards, K-12 administrators, and county officials that’s giving them a powerful voice they should never have.

Last year, Pompeo shook his head, a high school in Illinois disinvited a Taiwanese official from a climate panel because they’d been pressured by the Chinese.

Just last month, China’s Consul General sent a letter to the speaker of a state legislature demanding that a U.S. leader not engage with Taiwan.

“Think about that,” the secretary shook his head. “You had a diplomat from China assigned here to the United States, a representative of the Chinese Communist Party in New York City, sending an official letter urging that an American elected official shouldn’t exercise his right to freedom of speech. And this isn’t a one-off event … Chinese consulates in New York, in Illinois, in Texas, and two in California … are very politically active.”

Some of those intentions, he reminded listeners, extend well outside the U.S. And while we want to help China (especially now with the outbreak of the coronavirus) and maintain a good relationship, that’s hard to do when the country’s leaders are taking advantage of other nations.

Just look at the controversy surrounding China and the World Bank. The U.S. pours billions of dollars a year into the institution, only to watch the communist leaders apply for—and receive—tens of millions of dollars they don’t need.

They were “technical and vocational training” loans, we were told—only to find out later that countries like America had been financing China’s persecution campaign, building concentration camps and surveillance weapons to torture entire people groups.

Fortunately, Pompeo explained Wednesday, the U.S. has made “real progress” to ensure that never happens again.

“I’ve spoken with the new leader at the World Bank. He understands … how the American people’s taxpayer dollars that go to that institution shouldn’t be used in ways that are detrimental to [our] security.”

In the meantime, there’s plenty of security to worry about right here at home.

“What China does in Topeka and Sacramento reverberates in Washington, in Beijing, and far beyond. I want to urge vigilance,” Pompeo repeated. “It’s what we all must do, as Americans.”