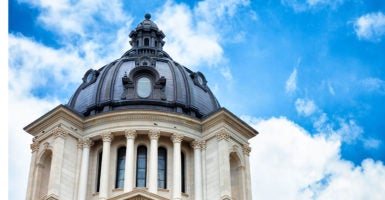 In South Dakota, the first-ever bill to put an age restriction on gender transition surgery and treatments is moving through the Legislature. Pictured: the state Capitol in Pierre, South Dakota. (Photo: powerofforever/Getty Images)

“It’s an absolute nightmare for a mother to live through.” Elaine Davidson’s voice shook as she talked. “I found out about the surgeries after the fact,” she says haltingly.

It was social media, she explained, where she first saw the photo of her daughter’s chest—bloody bandages covering the places where her breasts had been cut off.

Elaine’s daughter was 17. She had a double mastectomy and hysterectomy without her parents ever knowing—and without a single psychologist signing off.

In Oregon, Elaine says, kids as young as 14 can make this same decision without ever calling home. “These surgeries are done on an outpatient basis, which only required a few visits to a therapist with a master’s in social work. No psychologist, no psychiatrist, no years of therapy like many people think.”

And these young, innocent bodies, she struggles to explain, are “permanently marred.” “This is a very, very mutilating surgery.”

“I had previously raised concern to a therapist that I believe she’s on the autism spectrum. And I still do. But they dismissed it and instead just really pushed her toward medical transition. And I found out about the surgeries after the fact.”

When her daughter decided to have a phalloplasty, Elaine started to cry. “I flew to Portland twice. I begged everyone I could. I begged her. I couldn’t stop it. All I could do was be there for her.”

She watched, helplessly, as her daughter changed the course of her life forever. And she is determined that no parent should ever have to suffer that agony without a say again.

She joined the Kelsey Coalition, a movement of parents from all across the political spectrum, who are pleading with schools, lawmakers, and doctors to stop pushing children into a lifestyle they can never escape.

“I’m speaking out because I love my daughter … She has been a victim of ‘gender affirming’ medical procedures, and I was powerless to stop doctors from harming her.”

“Why we are letting children make life-altering, permanent, irreversible decisions about their bodies and about their health when we have enough sense not to let them get tattoos until they’re 18 or drink until they’re 21?” Elaine wants to know.

She, like the rest of the Kelsey Coalition, has been asking this question in South Dakota, where the first-ever bill to put an age restriction on gender transition surgery and treatments is moving through the Legislature.

“I think this law in South Dakota is a good start,” she agrees. “Sixteen, though, is still extremely young … “

At this point, though, states need to start somewhere. And South Dakota’s Vulnerable Child Protection Act is a commonsense law that would make it illegal to mutilate gender-confused children.

It’s time, Elaine insists, to help children “learn to love the bodies in which they were born. Isn’t that what the body-positivity movement is all about? Transgender-identifying children need our compassion, and they need our help. They need responsible adults to gently question their beliefs, not blindly affirm them. They need proper therapy and guidance, not drugs and surgeries.”