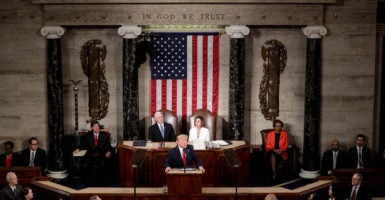 Patriotism was one of the most important themes of President Donald Trump’s third State of the Union address on Tuesday night.

It was a night of high emotion and more than a few theatrics that began with Trump refusing to shake House Speaker Nancy Pelosi’s hand and ending with Pelosi tearing up a copy of the speech. All this took place in the shadow of a highly charged impeachment trial that finally came to a close with an acquittal a day later.

Beyond Trump’s specific descriptions about the state of the economy, American health care, and a variety of other issues relating directly to his policies, he connected modern America to shared and celebrated triumphs from our nation’s past.

Using that patriotic theme—which Trump has interspersed in all of his major speeches, from his inaugural address to his latest State of the Union address—has been one of the undeniable strengths of his presidency.

It’s a quality that was once shared by presidents across the political spectrum, but in the age of social justice warriors, statue-smashing, anthem-kneeling, and cancel culture—aided and abetted by an array of institutions from the legacy media and Hollywood to academia—Trump’s brand of unapologetic patriotism stands out.

It was particularly pronounced at the end of Trump’s speech, in which he said that Americans have a “glorious and magnificent inheritance,” after naming and praising a long list of American heroes from throughout the country’s history.

He then hearkened Americans to embrace their pioneer, frontier heritage as we as a nation again push boundaries and reach for greater accomplishments, as we always have.

“Our grandest journeys are not yet made. The American Age, the American epic, the American adventure has only just begun,” Trump said. “Our spirit is still young, the sun is still rising, God’s grace is still shining, and, my fellow Americans, the best is yet to come.”

It’s hard to understate the importance of that message.

As I wrote in my book “The War on History: The Conspiracy to Rewrite America’s Past,” there has been a concerted effort to uproot and diminish America’s past as a means to replace traditional American ideals and principles with radical ones.

This effort is on full display with the 1619 Project of The New York Times Magazine, which creates a distorted and often inaccurate picture of American history, a history that at its core the magazine says is rooted in slavery and racism, not liberty.

At the heart of that way of thinking, which is now embedded deeply in American cultural institutions, is that Americans should feel shame, rather than pride, in their country’s accomplishments and that the bad things about our past negate the good.

That in part is why so many of those institutions are now being looked upon with skepticism, why Americans are in a populist mood, and why Trump’s message resonates with so many people.

Trump wisely chose to highlight both the heroes of our history—like Abraham Lincoln, Frederick Douglass, and the Wright brothers—as well as the ones still with us, such as 100-year-old Charles McGee, one of the few surviving Tuskegee Airmen, who he promoted to brigadier general.

The message was not simply that we must celebrate our past. Instead, it was about keeping Americans rooted in the best aspects of their past, while focusing their eyes squarely on the horizon.

That is a quintessentially American outlook. Often, it’s the very belief that our nation has a special mission in this world—that we are the unique pathfinders, trailblazing as no one else has—that has become a self-fulfilling prophecy.

Though Americans, like any other people, are flawed and fallen, the United States was not created to be a nation like any other. We may not be perfect, but we are committed to a great cause, and it took many heroes—both remembered and forgotten—to ensure that that legacy would endure.

We look to that brighter future not because we are ashamed of our past, but because we are proud of what our country stands for and would like nothing more than to see it have a greater and even more triumphant future.

Today, as new and potent threats to our way of life emerge in the world, it is essential that Americans come to understand and deepen their appreciation of our history, reject the noxious identity politics that threaten to shatter the concept of e pluribus unum, and embrace an inclusive Americanism that can unite the country in the face of its challenges.

Trump’s State of the Union address affirmed that ethos.