What to Expect in Trump’s State of the Union Address 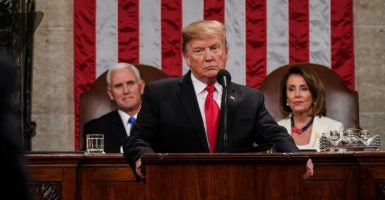 President Donald Trump will deliver his third State of the Union address Tuesday night. Today, I’m joined by Tommy Binion of The Heritage Foundation to get a sneak preview. Plus: Franklin Graham gets canceled in the United Kingdom. Rachel del Guidice and I discuss.

We also discuss the following stories:

Daniel Davis: President Trump is gearing up to deliver his State of the Union address, and joining me now for a preview of what to expect is Tommy Binion, the vice president of government relations here at The Heritage Foundation. Tommy, thanks for your time.

Tommy Binion: No, thank you for having me. It’s great to be on back on the pod.

Davis: Tommy, what’s the president’s No. 1 message going to be going into tonight?

Binion: Well, it’s going to be several things, but I think more important than the message here is going to be the moment. Think about this moment for just a second. We have not yet concluded the impeachment trial—that will conclude tomorrow.

He has just signed, just last Wednesday, a landmark trade agreement, the United States-Mexico-Canada Agreement. The Iowa caucus is over. Donald Trump will square off against one of these many candidates this fall. The economy is soaring.

We are on the heels of a sort of dramatic moment with Iran that was de-escalated, as I hope we’re going to hear about tonight after the killing of Gen. [Qassim] Suleimani.

It’s just an incredible moment. It’s going to be must-watch TV, but not because of exactly what he’s going to say, but because of the moment that’s sort of swirling around the House chamber as he walks into it.

And then, I trust this president. He is the master of the moment. He never shies away from anything. And I think what I’m hoping to hear is for him to tell the truth about his successes, but for him to unite us as a country around his, what I think is a very positive, proactive agenda.

Davis: Early reports are that he’s going to focus a lot on the “blue-collar boom” that’s taken place since he was elected. There’s been a lot of talk about, you mentioned, the USMCA [U.S.-Mexico-Canada Agreement], progress on a deal with China. How are things looking for manufacturing and the folks that went into his column in 2016 who are looking ahead to 2020?

Binion: Well, for those of you listening, ask yourself how it’s going for you. The economy has really taken off since President Trump was elected. Manufacturing is doing better in this country, but more importantly, wages are up, jobs are [up], unemployment is down. Chances are, you are way better off financially today than you were before.

This is really a tide that has lifted all boats. And that’s a really uniting message. Everybody has been swept, I think, forward in a good way because of this economy.

The [United States-Mexico-Canada Agreement] was not negotiated with just major corporations in mind. It was a trade deal that the president brought the perspective of everyday Americans to, and three years into his presidency.

I think he has a lot of ink on the page, so to speak, that he can really weave that message through.

Davis: Well, the signature campaign promise was to build a wall, and twice now he’s reallocated military construction funds to build a wall—going around Congress because Congress hasn’t put up the money. The Supreme Court has basically given him the go ahead for that.

Do you expect him to make another big pitch to Congress for wall funding?

They’ve been clear in the polls that immigration is important to them. Building the wall was a signature campaign promise of his and we know that President Trump wants, he personally cares about going through and making sure he is meeting all of his campaign promises and the wall is one of them.

This time last year, last time we were talking about a State of the Union address, there was a government shutdown about the issue of building the wall.

Democrats have tried to block him from achieving that, basically just because it was a campaign promise of his, not for any sort of comprehensible policy reason.

He has, as you’ve mentioned, had some success in doing that, but not enough. We need more border security, more border infrastructure, and this is going to be a key year for building the wall.

Not a lot of that has to do with Congress, as you mentioned. At this point, it is an administration project. They don’t need Congress to do what they’re going to do in 2020 with respect to the wall, but he may very well mention it in the State of the Union because as we know, the audience for the State of the Union is not just who is sitting there in that chamber.

They think they’re the only audience, but they’re very wrong about that. It’s the American people.

Davis: All right. Well, Tommy, we’re going to be covering it at The Daily Signal, giving the quick Heritage responses to what the president has to say. Thanks for coming and giving us a preview.

Binion: Thank you for having me. Enjoy the show.