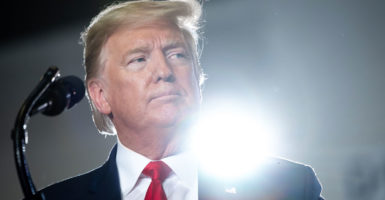 Two of the FBI’s four applications for warrants under the Foreign Intelligence Surveillance Act to spy on a Trump campaign adviser lacked probable cause and should not have been issued in the first place.

That’s the stunning admission by the Justice Department, contained in a recent court filing with the secretive Foreign Intelligence Surveillance Court in Washington.

What’s more, the FBI made “material misstatements and omissions” in those two warrant applications, according to the Justice Department, and the agency isn’t using information from any of the four warrants now.

Before dissecting how we got here, it’s important to note that this forthright admission by the Justice Department cuts against the story concocted by the Democrats about the legal merits of the Russia investigation.

In a 2018 memo titled “Correcting the Record: The Russia Investigation” and sent to all House members when Democrats were in the minority, Rep. Adam Schiff, D-Calif., asserted: “FBI and DOJ officials did not ‘abuse’ the Foreign Intelligence Surveillance Act (FISA) process, omit material information, or subvert this vital tool to spy on the Trump campaign.”

Turns out the FBI and Justice Department did abuse the FISA process, omit material information, and subvert justice, and the DOJ now has admitted it.

The wheels came off the Trump-Russia collusion bus in December, when the Justice Department’s Office of Inspector General published a report titled “Review of Four FISA Applications and Other Aspects of the FBI’s Crossfire Hurricane Investigation.”

Michael Horowitz, the inspector general of the Justice Department, testifying before Congress, laid bare the gross deficiencies in the FBI’s investigation. Horowitz noted seven significant inaccuracies and omissions, as we wrote about here.

Horowitz’s report got the attention of the FISA court.

Judge Rosemary M. Collyer, presiding judge at the time, entered an order Dec. 17. Collyer directed that “the government shall, no later than January 10, 2020, inform the [court] in a sworn written submission of what it has done, and plans to do, to ensure that the statement of facts in each FBI application accurately and completely reflects information possessed by the FBI that is material to any issue presented by the application.”

That’s strong stuff coming from the FISA court, especially since the rebuke was public.

On Jan. 7, the new presiding judge, James “Jeb” E. Boasberg, entered another order “regarding the handling and disposition of information,” seeking detailed information about how the government planned to handle sensitive matters before the court in the future.

Boasberg noted that the court had received notice of “material misstatements and omissions” in the third and fourth FISA applications against former Trump campaign aide Carter Page.

Boasberg’s order referred to a letter sent to the court by the Justice Department on Dec. 9, which contained the following statement: “DOJ assesses that with respect to the applications in Docket Numbers 17-375 and 17-679, ‘if not earlier, there was insufficient predication to establish probable cause to believe that Page was acting as an agent of a foreign power.’”

In nonlawyer speak, that means the government isn’t using any of the evidence it may have gotten as a result of spying on Page based on any of the four FISA warrants.

Who Signed Off on FISA Warrants

Under the applicable rules, FISA warrant applications must be signed by senior Justice Department officials. With respect to the warrants to spy on Page, the first application in October 2016 was signed by then-FBI Director James Comey and then-Deputy Attorney General Sally Yates. Collyer approved the application.

The second application in January 2017 also was signed by Comey and Yates. Judge Michael Mosman approved the application.

The Justice Department responded to Collyer’s order with a 15-page filing Jan. 10. The response explains the FBI’s accuracy procedures in the context of applying for a FISA warrant, as well as the historical guidance provided to agents in the Justice Department’s National Security Division (who appear before the FISA court).

The response then identifies gaps and seams in the current process, and how they intend to fix those deficiencies. It explains how FBI agents are required to create, maintain, and update a subfile that contains “all materials that document the support for each factual assertion contained in FISA applications,” and that there must be “adequate documentation for every factual assertion contained within a FISA declaration.”

Facts are deemed “material” if the “information is capable of influencing the Court’s probable cause determination,” the Justice Department’s response says. It says the department is required to “err in favor of disclosing information that [it] believes the Court would want to know.”

In response to the report by the Justice Department’s inspector general, the FBI identified multiple corrective actions it said it is taking and will undertake to make sure this doesn’t happen again.

The current FBI director, Christopher Wray, signed an affidavit attesting to the corrective actions the bureau is taking and will take to improve FISA accuracy, including updating forms, checklists, training materials, and protocols.

Altogether, Wray directed FBI personnel to take more than 40 corrective actions, including 12 that relate to the FISA process. These proposed actions are substantive and serious and would, if enacted and carried out, go a long way to improve the system.

Whether it satisfies the FISA court, or Congress, remains to be seen.

Wray noted that the FBI “deeply regrets the errors and omissions” in this saga, and that the underlying conduct was “unacceptable and unrepresentative of the FBI as an institution.”

Noticeably absent from any public court filings in this matter is any mention of disciplinary action(s) taken against any Justice Department or FBI employee for the material errors and omissions that occurred.

Let’s hope that those personnel actions are underway and that if crimes were committed, John Durham, the U.S. attorney for the District of Connecticut who has opened a criminal probe into this matter, takes appropriate action.