Clarence Thomas, in His Own Words, Coming to a Theater Near You 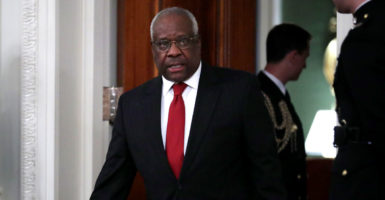 Justice Clarence Thomas arrives Oct. 8, 2018, for the ceremonial swearing in of Justice Brett Kavanaugh in the East Room of the White House. (Photo: Chip Somodevilla/Getty Images)

It has been said that the very moment a man finds himself, he finds God.

That captures the story of Supreme Court Justice Clarence Thomas, a man of deep faith whose youthful struggles with racism caused that faith to be shaken, but who later returned to it more deeply and more resolutely because of his great character and refusal to settle for anything but truth.

The new documentary film “Created Equal: Clarence Thomas in His Own Words” will be released in theaters nationwide Friday, exquisitely timed with February being Black History Month.

But this is also a time of great tensions and divisions in our nation, with race continuing to be one of the main issues dividing us.

In 2007, Thomas published his memoir “My Grandfather’s Son,” which tells the story of his journey from beginning life dirt-poor in Pin Point, Georgia, to his confirmation as U.S. Supreme Court associate justice in 1991.

Now, filmmaker Michael Pack delivers Thomas’ remarkable story to us in his own words, bringing to the screen exclusive interviews with Thomas and his wife, Virginia Thomas, in which they speak their minds.

Thomas strikes a strong personal note with me because I know well what he means when he talks about being attacked for being black by not acting and saying what is expected from a black person.

I was in the early days of my own work in policy activism when Democrats brought Anita Hill into Thomas’ confirmation hearing. I helped organize a large group of black pastors to come to Washington from around the country and demonstrate support for him.

When Branch Rickey, president and general manager of the then-Brooklyn Dodgers, recruited Jackie Robinson to be the first black player in Major League Baseball, Rickey warned Robinson that he would be challenged to focus on the game and not react to the racist jeers that would come—not just from the stands, but from his own white teammates.

“They’ll taunt you and goad you,” Rickey warned. “They’ll do anything to make you react. They’ll try to provoke a race riot in the ballpark.”

Clarence Thomas had to stand the same test.

Thomas describes what he had to endure: “[Y]ou’re not really black, because you’re not doing what we expect black people to do.”

And with regard to what the left was trying to achieve with Hill, he said: “People should just tell the truth: ‘This is the wrong black guy. He has to be destroyed.’”

That circles back to Thomas’ similarities with Robinson. Both men drew their strength from their deep faith to stand with integrity in the face of merciless attacks.

Thomas talks about the restoration of his Catholicism after his youthful rebellion and black radicalism: “I asked God, ‘If you take anger out of my heart, I’ll never hate again.’”

Anger and hate are just other forms of slavery. Other people are controlling you.

Thomas became a free man once his faith was restored.

Thomas is now the most senior justice on the Supreme Court and has become one of America’s great conservative elder statesmen. His opinions over the years already have created a legacy of finely and rigorously reasoned jurisprudence, faithful to the core principles on which America was founded.

When Thomas was sworn in—after enduring what no man or woman should have to endure in his confirmation hearings—he alluded in his speech to Psalm 30, which reads: “I will praise you, Lord, for you have rescued me. You refused to let my enemies triumph over me. … Weeping may go on all night, but joy comes with the morning.”

What better way to pay tribute to America and black history than going to see this important new film?