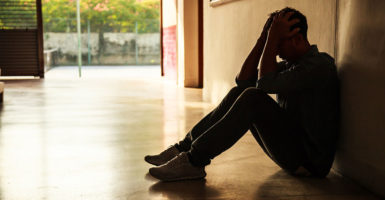 It seems that Americans may have been happier, and certainly less lonely, during the Great Depression and World War II than today. (Photo: Vichai Phububphapan/Getty Images)

I began part one of “Why Are So Many Young People Unhappy?” with data showing the apparently unprecedentedly high rate of unhappiness among young people in America (and elsewhere, but I am focusing on America).

The rates of suicide, self-injury, depression, mass shootings, and loneliness (at all ages) are higher than ever recorded.

It seems that Americans may have been happier, and certainly less lonely, during the Great Depression and World War II than today, even with today’s unprecedentedly high levels of health, longevity, education, and material well-being.

Increased use of illicit drugs and prescription drug abuse, and less human interaction because of constant cellphone use are two widely offered, valid explanations. Less valid explanations include competition, grades anxiety, capitalism, and income inequality. And then there are young people’s fears that because of global warming, they have a bleak, and perhaps no, future.

But I do believe that a loss of values and meaning are the two greatest sources of unhappiness.

Among the values lost are those of communal associations. As the great foreign observer of early American life Frenchman Alexis de Tocqueville wrote in 1831, Americans’ unique strength derived largely from their participation in innumerable nongovernmental associations—professional, social, civil, political, artistic, philanthropic, and, of course, religious.

But these have all dwindled as government has become ever larger. Whereas Americans got together and formed bonds of friendship through nongovernmental associations, through what organizations will Americans form friendships today?

In a video presentation at its 2012 national convention, the Democratic Party offered its answer: “Government’s the only thing that we all belong to,” the narrator said.

Then there are traditional middle-class values, like getting married first and then having children.

Today, a greater percentage of Americans are born to unwed mothers than ever before, and fewer people are marrying than ever before. There are, for the first time in our history, more single Americans than married Americans.

And now we come to the biggest problem of all: the lack of meaning.

Aside from food, the greatest human need is meaning. I owe this insight to Viktor Frankl and his classic work “Man’s Search for Meaning,” which I first read in high school and which influenced me more than any book other than the Bible.

But Frankl was right.

As regards biology, there is no evolutionary explanation for the need for meaning. Every creature except the human being does fine without meaning.

And nothing has given Americans—or any other people, for that matter—as much meaning as religion. But since World War II, God and religion have been relegated to the dustbin of history.

More than a third of Americans born after 1980 affiliate with no religion. This is unprecedented in American history; until this generation, the vast majority of Americans have been religious.

Maybe, just maybe, the death of religion—the greatest provider of meaning, while certainly not the only—is the single biggest factor in the increasing sadness and loneliness among Americans (and so many others).

A 2016 study published in the American Medical Association JAMA Psychiatry journal found that American women who attended a religious service at least once a week were five times less likely to commit suicide. Common sense suggests the same is true of men.

The bottom line: The reason so many young people are depressed, unhappy, and angry is the left has told them that God and Judeo-Christian religions are nonsense; their country is largely evil; their past is deplorable; and their future is hopeless.

That seems to be a major reason, if not the reason, for so much unhappiness: not capitalism, not inequality, not patriarchy, sexism, racism, homophobia, or xenophobia but rather having no religion, no God, no spouse, no community, no country to believe in, and, ultimately, no meaning. That explains much of the unprecedented unhappiness.

And it explains the widespread adoption of that secular substitute for traditional religion: leftism. But unlike Judaism and Christianity, leftism does not bring its adherents happiness.