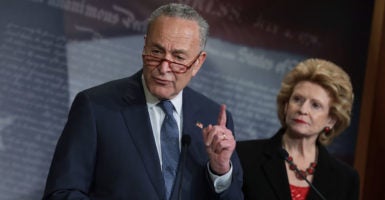 In a column published at Law.com in December, one commentator argued that senators who refuse to be impartial should be disqualified from participating in the impeachment trial of President Donald Trump.

A few days ago, an ethics lawyer from the George W. Bush administration called Senate Majority Leader Mitch McConnell, R-Ky., a “perjurer” for taking the oath to “do impartial justice” in the trial after saying he would not be an “impartial juror.” They might want to reconsider their position.

If these people really mean what they say, of course, any senator who has taken a position on the president’s guilt would have to bow out.

In that case, say goodbye to Sen. Kamala Harris, D-Calif. On Monday, Jan. 13, she spoke on the Senate floor and stated, as a fact, that Trump “pressured a foreign nation to interfere in our elections.” That’s an almost word-for-word recitation of the first impeachment article, which states that Trump “solicited the interference of a foreign government … in the 2020 United States presidential election.”

Harris went on to say that “it is unacceptable for a president to shake down a vulnerable foreign nation for personal or political benefit.” This too echoes the first impeachment article, which claims that Trump used the power of his office “to obtain an improper personal political benefit.”

If publicly accusing a defendant of the specific offense for which he has been impeached, in virtually identical language as that impeachment, is not refusing to be impartial, what is? Harris, however, is far from alone.

Sen. Mazie Hirono, D-Hawaii, who had rejected the presumption of innocence during the confirmation process for Justice Brett Kavanaugh, has said she would vote to convict unless Trump could actually exonerate himself.

Sen. Sheldon Whitehouse, D-R.I., says that the impeachment articles are supported by “a wealth of undisputed facts.” And Sen. Richard Blumenthal, D-Conn., was even more direct, saying that the “case is clear: President Trump tried to trade away our national security for a personal political favor.”

As if reading directly from the same talking points, Sen. Kirsten Gillibrand, D-N.Y., says that “President Trump put our national security at risk in order to obtain political favors.” And Sen. Christopher Murphy, D-Conn., insists that “the bottom line is this: President Trump abused his authority by using taxpayer-funded aid to pressure a foreign government to help him win reelection in 2020.”

Senate Minority Leader Charles Schumer, D-N.Y., has similarly attacked McConnell, accusing him of refusing to be impartial. Yet, as CNN has reported, leading up to President Bill Clinton’s impeachment trial, Schumer repeatedly said that the Senate is “not like a jury box.” Indeed, when running for the Senate in 1998, he asked people to vote for him precisely because he would be a vote to acquit Clinton.

House Democrats rigged the rules to guarantee a pre-determined impeachment result. Now Senate Democrats are trying to rig the jury pool by trying to exclude senators not likely to convict. We all know how this is going to end. Try the impeachment and let’s move on.