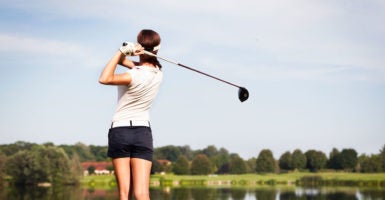 I’m no professional athlete, but years after my sex reassignment surgery and the near-elimination of testosterone from my system, my beginner’s tennis serve easily overpowered and dismayed the female participants when I took a junior college introductory women’s tennis course in my 40s.

The stark truth on display on that tennis court was that my upper and lower body strength and my grip were still that of a man. No amount of feminizing procedures could take away the strength-building effects of puberty on my male body.

Heck, my big hands often gave me away, even though in every other respect I appeared female.

That was a simple junior college class where the women’s grades didn’t hinge on beating me, a transgender woman. But the stakes increase astronomically when competition, standings, and livelihood enter the mix, as they do in women’s sports.

A female golfer who participates recently contacted me with concerns about the upcoming season because it will include a transgender woman competing in the women’s division.

Australian Jamie O’Neill, born male and now identifying as female, holds a bodily advantage over all the women in World Long Drive. The stats from O’Neill’s website predict the trajectory of O’Neill’s promising career in long drive golf.

Science Says Men Are Stronger Than Women, Even After Sex Reassignment Surgery

Tia Ghose writes in Live Science about the superior strength of men:

Men are physically stronger than women, on average. A study in the Journal of Applied Physiology found that men had an average of 26 lbs. (12 kilograms) more skeletal muscle mass than women. Women also exhibited about 40% less upper-body strength and 33% less lower-body strength, on average, the study found. …

And a 2006 study in the same journal revealed that men had much stronger grips than women—the difference was so big that 90% of the women scored lower than 95% of the men. The team also looked at highly trained female athletes who excelled at sports requiring a strong grip, such as judo or handball. Though these women did have a stronger grip compared with other women, they still performed worse than 75% of the men on this task.

The activists argue that transgender women don’t have a strength advantage over women after sex reassignment surgery because their testosterone levels drop so low. But recent scientific findings don’t support that argument. In fact, a recent study blows it out of the water.

The 2019 study published in The Journal of Clinical Endocrinology & Metabolism explored the effects of gender-affirming treatment on muscle function, size, and composition during 12 months of therapy and found that transgender women generally maintain their male muscle strength, size, and composition.

The researchers called the changes in strength “modest” and concluded the “findings add new knowledge … which could be relevant when evaluating the transgender eligibility rules for athletic competitions.”

Indeed, to protect the integrity of all women’s sports, it is exceedingly important to consider this finding and limit biological males’ unbridled participation in women’s sports.

Further evidence shows that a low testosterone level doesn’t necessarily signal less strength and exercise performance, especially in those who exercise, such as athletes. Research on men whose bodies can’t produce testosterone (such as transgender women post-surgery) shows that even brief exposure to exercise significantly improved muscle mass, strength, physical function, and balance.

A 2019 study observed male endurance athletes in intensive training and the effect on testosterone level and performance. Many of the men saw their testosterone levels decrease, even reaching the clinical criteria for androgen deficiency, like transgender women do.

But interestingly, all showed an increase in performance. The researchers reported, “[N]one of the participants displayed any running performance decrement, in fact, the opposite occurred.”

Taken together, the evidence shows that male bodies, even with low testosterone levels, maintain male strength and their inherent, significant advantage over female bodies.

When World Long Drive joined other professional sports to open the women’s division to transgender women, every biologically correct woman was diminished, demoted in effect, and became irrelevant. World Long Drive did not stand up for women.

From weightlifting and running to boxing, cycling, and now World Long Drive golf, men who identify as women continue to infiltrate and destroy women’s sports. Meanwhile, the theories about transgender women’s strength being equivalent to women’s are being debunked.

The governing authorities over women’s sports need to acknowledge that transgender women maintain their male strength long after transition, and correct this injustice.