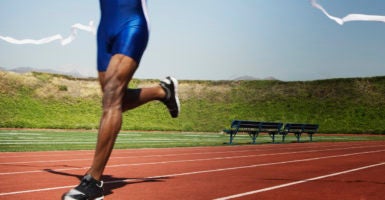 No matter how many hormones a biological male takes, every time he competes against a female, he has an unfair advantage. (Photo: Getty Images)

Clare Hepler is a member of the Young Leaders Program at The Heritage Foundation.

Fair competition in women’s sports remains under attack as male athletes continue to join and compete on women’s teams and against women.

Male athletes Cece (formerly Craig) Telfer and June (formerly Jonathan) Eastwood both have been competing in NCAA women’s sports for the past year. Both previously competed on their school’s men’s teams and were competitive in the men’s division.

Both have taken medication to suppress testosterone according to the NCAA guidelines, but unlike in Olympic guidelines, there is no maximum level of testosterone that transgender athletes must not exceed in NCAA sports.

That means that many transgender athletes are still competing in women’s sports with significantly higher levels of testosterone than that of biological women. Furthermore, there are other bodily features characteristic of males that won’t disappear with hormone suppressors, such as bone density and height.

Some argue that Telfer and Eastwood do not have an unfair advantage because they did not win every women’s meet in which they competed. Yet, their records show that their presence had a significant detrimental impact on the biological women against whom they competed.

Telfer decided to join the women’s track and field team at Franklin Pierce University in New Hampshire as a fifth-year senior, pursuing a second major. Telfer had previously left the sport after three years on the men’s team.

On the women’s team, Telfer has had a number of victories. He won the NCAA Division II title in the women’s 400-meter hurdles and was celebrated as the first transgender woman to do so.

Telfer also finished fifth in the 100-meter at the same meet. Despite some losses, Telfer has made a name in the sport, winning titles at the Northeast-10 Championships in the 60-meter, 200-meter, and 60-meter hurdles and received the Most Outstanding Athlete honors. Telfer has also been a key factor in the Franklin Pierce women’s track and field team’s first ranking in the top 25 nationally.

Eastwood is another transgender athlete who has taken up track and field on a women’s team in the past year. In high school, Jonathan Eastwood held state titles in the 800-meter, 1,600-meter, and 3,200-meter races, as well as in cross-country.

In college, he competed on the University of Montana men’s cross-country team for the first three years. While on the men’s team, his times were significantly faster than the women’s collegiate records in the 800-meter, 1,500-meter, and 5,000-meter races.

Taking testosterone-suppression medication has slowed down the now-June Eastwood, yet he remains a competitive threat to women. In Eastwood’s first meet on the women’s team, he finished seventh overall and second on Montana’s team. Even though Eastwood didn’t dominate, running that race enabled the Montana women’s team to finish second in the meet instead of third.

Since then, Eastwood has continued to outpace biological women. For instance, the runner was named Big Sky Athlete of the Week after placing second at the Bronco Invitational. Eastwood also placed eighth at the Big Sky Conference Cross-Country Championships in Colorado. In fact, Eastwood and another teammate were in the top 10, earning honors and making it the first time in nine years that Montana has had two top 10 finishers.

Both Telfer and Eastwood are examples of a growing trend of biological males taking over female sports.  With the rise of transgender policies in sports that allow biological men and boys to compete against women and girls, the playing field will be irreversibly skewed toward the biologically male athletes. Women and girls will lose their competitiveness.

While it does not appear that either of these two athletes began to compete with the opposite sex out of spite or ambition, the results nonetheless remain the same: Females lose anytime a biological male competes as a female.

No matter how many hormones a biological male takes, every time he competes against a female, he has an unfair advantage.

It’s a denial of science and shows complete disregard for fairness to say that a male athlete who identifies as female is just the same as the biological females there.

A place on the roster, team, or podium did not spontaneously open up for him. Instead, some girl or woman didn’t make the team, fell lower in the rankings, or didn’t do as well because of an unfairly tilted playing field.

While male athletes do not always win when competing against females, their presence will have serious negative consequences for the future of women’s and girls sports.