For Korean Americans, Divided-Family Reunification Act Is a Ray of Hope 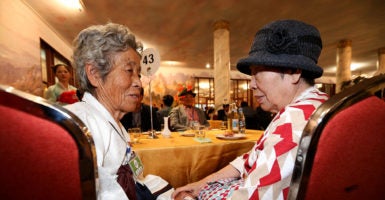 Yujin Kim is an Asan fellow in the Asian Studies Center at The Heritage Foundation.

Despite more than 20 family reunions held among divided families in South Korea and North Korea, not a single formal family reunion has taken place between Korean Americans and relatives in North Korea.

More than 100,000 divided family members were residing in the U.S. in 2000, but now many of them are deceased, and only a few thousand are left. Time is running out.

In light of these significant challenges, Congress sprang into action.

The House Foreign Affairs Committee passed the Divided Families Reunification Act (H.R. 1771) with bipartisan support on Oct. 30. It awaits a vote in the full House.

The bill would direct the State Department and the U.S. special envoy on North Korea human rights to prioritize reunions of Korean American divided families and their family members in North Korea.

The term “divided family” refers to those who are separated from their relatives due to the division of the Korean Peninsula. That tragic separation has lasted for more than 60 years.

Many of them are not even sure whether their loved ones are still alive. According to the Ministry of Unification in South Korea, 133,361 people are registered in the Divided Family Information System.

The House Foreign Affairs Committee’s recent attention is nothing new. Congress has long sought to shed light on this pressing issue.

In 2007, the Congressional Commission on Divided Families was founded. Since then, the National Defense Authorization Act for fiscal 2008 (H.R. 4986, Section 1265) was passed by Congress and signed into law by President George W. Bush. It required the president to report to Congress on necessary governmental efforts to facilitate family reunions.

Congress also discussed calling on the U.S. special representative on North Korea policy to prioritize the divided-family issue and to designate a coordinator for the families, if necessary.

Historically, it has been a lack of political will at the executive branch level in Washington and Pyongyang that has stymied progress. Most recently, family reunions were not raised at either of the U.S.-North Korea summits in Singapore or Hanoi.

When the Voice of America asked about the possibility of family reunions after the Singapore summit, the State Department just repeated a perfunctory statement that it was committed to building a close relationship with North Korea for peace and prosperity.

North Korea has made a limited number of statements on family reunions. In August 2017, North Korea’s Permanent Mission to the United Nations sent a letter to the Northern California Council of Korean Americans from North Korea saying that it would actively support the association’s family-reunion projects.

However, it has never led to a government-to-government agreement. If the subject of family reunions is broached during negotiations, it’s highly likely that Pyongyang will seek compensation in return for hosting reunions, an unreasonable demand the U.S. is unlikely to meet.

Still, that shouldn’t prevent the Trump administration from trying. As it considers issues to prioritize, the reunion of Korean American divided families should be on the list, especially given the time-sensitive nature of the challenge.

Working-level talks between the U.S. and North Korean counterparts in Stockholm in October ended with no agreement. Talks remain stalled, but if they resume, hosting family reunions might be a small issue where Washington and Pyongyang can make progress and maintain momentum in negotiations.

The reunification of ethnic-Korean families, especially those involving Americans, should be a priority for policymakers. Congress deserves high marks for helping make it one.