Why Iran’s Cruise Missiles Are a Serious Threat 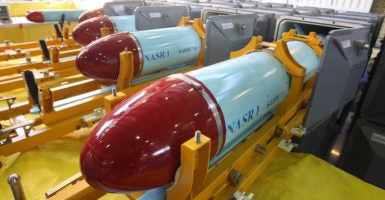 Nasr 1 (Victory) missiles are displayed during the inauguration ceremony of the Nasr 1 cruise missile production facility at an undisclosed location in Iran on March 7, 2010. (Photo: Vahid Reza Alaei/AFP/Getty Images)

This week, Iran responded to the killing of Gen. Qassim Suleimani, the Islamic Revolutionary Guard Corps Quds Force commander, by raining ballistic missiles upon bases used by U.S. forces in Iraq. The strikes were largely seen as militarily ineffective.

Possible reasons for that range from poorly performing missiles to an early warning from U.S. intelligence to the defensive measures taken by U.S. and Coalition troops, among others. In any case, we’re grateful there were no casualties.

While the Iranian regime insists that its efforts to wreak “revenge” for Suleimani’s death have been achieved, that may not actually be the case. A follow-on Iranian attack could come—and may be very different.

Next time, Iran could use its combat-tested and -capable cruise missiles.

Iran has the largest missile arsenal in the Middle East. It has diversified its missile force beyond ballistic missiles to include land attack cruise missiles (LACMs) and anti-ship cruise missiles (ASCMs) that can be launched from the land, sea, or air.

While it is unclear whether these new missiles are operational, Iran seems committed to fielding a formidable cruise missile force. And understandably so.

Cruise missiles can be small and difficult for sensors such as radars to detect. They can be launched from a variety of platforms, fly evasively, and use a number of accurate navigational aids—including GPS and terrain mapping—to strike their targets.

Iranian cruise missiles have reach, too.

Beyond Iran, the Houthi rebels, an Iranian proxy in Yemen, has the Quds-1 LACM with a range of between 700 and 1,350 kilometers. The Lebanese terror group and Iranian ally, Hezbollah, may also currently have cruise missiles.

Indeed, Iran and its proxies have already used cruise missiles to important effect.

For instance, in September 2019, Iran struck the expansive Saudi oil processing facility at Abqaiq and the oil fields at Khurais with armed drones and cruise missiles. The attack cut Saudi oil production by 50%.

During its February 2015 “Great Prophet” war games in the Persian Gulf, Iran used a life-sized mock-up of the aircraft carrier USS Nimitz as a target—sending an unmistakable message to the United States.

The war between the Saudi-led coalition and the Houthi rebels has also seen significant missile and armed drone action. Indeed, the Houthis reportedly launched over 100 missiles, including some cruise missiles, at Saudi Arabia from Yemen.

In June 2019, Houthi rebels claimed responsibility for firing a cruise missile, possibly a Quds-1 or Iranian Ya Ali, at a civilian airport 125 miles north of the Yemen-Saudi Arabia border, injuring some 20 people.

Clearly, Tehran’s combat-tested cruise missiles pose an existing—and growing—threat to U.S. interests in the Middle East, especially the large number of deployed U.S. military forces both ashore and at sea.

It’s no comfort, either, that Tehran is proliferating cruise missiles to its allies and proxies, diversifying the potential threat with which U.S. forces, their allies, and partners must contend as tensions simmer in the region.

In the possession of non-state actors, Iranian cruise missiles increase the potential range of the conventional and unconventional threats Iran and its allies and proxies pose to U.S. interests.

Beyond concerns about cruise missiles with conventional warheads, there should also be growing anxiety about the possible ability of these missiles to carry weapons of mass destruction, especially considering Iran’s ongoing violations of the Joint Comprehensive Plan of Action.

In light of the seeming effectiveness of Iranian and proxy cruise missile attacks to date, Tehran will likely spend more time, effort, and money on this program, increasing the Iranian asymmetric military threat, shifting the relative military balance in the region, and further undermining regional stability.

It’s also reasonable to argue that Iranian cruise missiles, like its ballistic missiles and armed drones, are an important element of Iran’s effort to enhance its military might, power projection, and geopolitical influence.

As such, important steps are needed to blunt Iran’s growing cruise missile prowess, including limiting funding for its program through economic sanctions, developing counter-cruise missile capabilities, and continuing the U.N.’s ban on transferring arms to Iran.