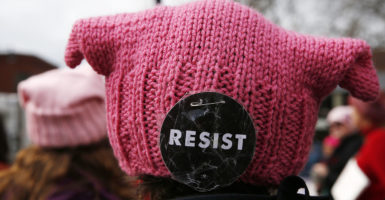 The Equal Rights Amendment to the Constitution has been renewed as a feminist issue after it failed to be ratified in the 1970s. (Photo: Jessica Rinaldi/The Boston Globe/Getty Images)

A radical feminist constitutional amendment that could dramatically change the country may be on the verge of passing.

Virginia’s now Democrat-controlled legislature is back in session, and there’s a strong chance it will pass the Equal Rights Amendment, which purports to grant equal rights to women under the Constitution.

The amendment has passed the Virginia Senate and could be passed by the House soon.

Conservative activist Phyllis Schlafly led a movement that effectively killed the passage of the ERA in the 1970s, but proponents of the amendment use dubious legal theories to argue that the amendment is still alive, and that Virginia would be the 38th state needed to ratify the amendment.

Heritage Foundation legal scholar Thomas Jipping noted that the key question is whether the amendment is still alive. He wrote in a report:

Jipping concluded that since Congress has the authority to set the deadline, which it did for the 1972 ERA, when the deadline passes the amendment effectively doesn’t exist.

This means ERA proponents have to start from scratch, which the Justice Department has argued as well.

However, that doesn’t mean that activist judges won’t uphold the ratification.

Regardless of legality, the ERA is bad news on its merits.

The ERA reads, in part, “Equality of rights under the law shall not be denied or abridged by the United States or by any state on account of sex.”

This may sound good and reasonable, but the Constitution already protects the rights of women as it does men.

So why pass it?

What the amendment would do, as my wife Inez Stepman wrote in the New York Post, is potentially “enshrine left-wing gender dogmas into the highest law of the land.”

The ERA could inevitably produce a host of negative consequences for the country.

Here are four of the many potential outcomes.

Perhaps one of the clearest results of the ERA would be that it would almost be impossible to exclude women from the draft.

At 18 years old, women would have to sign up for Selective Service just like men. Though the reinstatement of the draft in the near future is unlikely, in any case in which the draft was deemed necessary, women would be included due to the ERA.

Given the legal push to open up all combat roles to women, this could have potentially profound societal and individual consequences.

As Jennifer Marshall, Genevieve Wood, and Steven Bucci have written for The Daily Signal:

Another potential consequence of the ERA is, depending on legal interpretation, it could make gender-segregated bathrooms illegal in public buildings.

This fight over sex-segregated bathrooms and transgender bathrooms is already a fierce one in many states and in the courts, but the ERA could nationalize the issue.

Some on the left, including Justice Ruth Bader Ginsburg, have argued that unisex bathrooms would not be a consequence of the amendment under the “right of bodily privacy.”

Nevertheless, the Obama administration’s Justice Department issued a “Dear Colleague” letter that, according to a paper for The Heritage Foundation, instructed “schools that they may not notify students (or their parents) about whether they will have to share a bedroom, shower, or locker room with a student of the opposite biological sex.”

It’s certainly an open question how the courts will interpret the ERA regarding sex-segregated bathrooms. Doing away with them is increasingly becoming a progressive political priority.

3. End the Use of Women-Only Shelters

The ERA would put government-funded women-only institutions at risk, much the same way it would threaten unisex bathrooms.

It would be particularly problematic for facilities designed for battered women and those harmed by domestic violence.

As Tabitha Walter, executive director at Eagle Forum, wrote for The Federalist, “Women-only institutions such as women’s shelters and women’s correctional facilities would have to open their doors to dangerous men, further traumatizing women with abusive pasts.”

Of course, this flies directly in the face of ERA proponents’ narrative that this law is necessary to help women.

Potentially the most significant effect of passing the ERA is that it could potentially enshrine the “right” to taxpayer funding of abortion into the Constitution.

Already, pro-abortion groups have argued that state-based ERAs, which have been added to various state constitutions, guarantee publicly funded abortion. This is already the case in New Mexico, for instance.

“In November 1998, the New Mexico Supreme Court ruled 5-0 that the state must pay for elective abortions under the state’s Medicaid program,” according to CNS News. “The court found that New Mexico’s Equal Rights Amendment barred the state from restricting abortion differently than other ‘medically necessary procedures’ sought by men.”

Some pro-abortion advocates have argued that placing any limitation whatsoever on abortion amounts to sex discrimination.

National Right to Life Committee Legislative Director Douglas Johnson pointed out the logical conclusion of that thinking in 2008:

Once a court adopts the legal doctrine that a law targeting abortion is by definition a form of discrimination based on sex, and therefore impermissible under an ERA, the same doctrine would invalidate virtually any limitation on abortion.

Is it really a stretch to think that activist judges won’t interpret a federal ERA in a similarly radical way, especially given its open-ended language?

Whether the ERA is on the precipice of passing or not, it represents a deeply misguided change to the Constitution.

While justified as a way to protect the rights of women, it would actually unleash direct harm on women and would further cement on-demand abortion in America.

This article has been corrected to note when the push to create the Equal Rights Amendment began.