How the 2010s Became the Decade of Debt 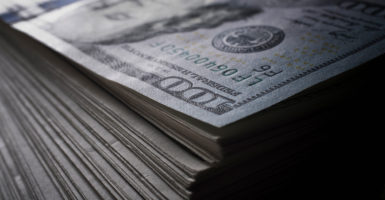 The spending spike of the 2010s began with a massive stimulus bill that didn't revive the economy. (Photo: REB Images/Getty Images)

At the end of 2009, the total federal debt was $12.3 trillion—a staggering amount of money.

It is important for Americans to understand how we got here, and what lawmakers can do to bring back fiscal sanity.

Poor Handling of the Financial Crisis

The federal government entered the 2010s with sky-high annual deficits. This had two primary causes.

Second, legislators used the recession as an excuse to massively increase the amount of federal spending. The 2009 stimulus package in particular led to record-setting spending levels.

President Barack Obama largely sold this additional spending as a way to jump-start the economy. But the structure of the stimulus package told another story. The politically motivated design of the package meant that it was ineffective at growing the economy.

What it did do effectively was grow the national debt. Low tax revenue and high spending combined to generate federal deficits of over $1 trillion per year starting in 2009.

Between the big-government stimulus and bank bailouts, millions of Americans were fed up with how both parties responded to the financial crisis. The tea party movement was born out of this backlash, and the 2010 election put dozens of believers in limited government in the House and the Senate.

Two events in 2011 showed both the promise and the limits of the tea party’s political muscle. On the positive side, the practice of “earmarking” spending for narrow political purposes came to an end.

The public’s concern over deficits led to the Budget Control Act of 2011, which raised the debt limit in exchange for rules meant to reduce the deficit in future years. The law had serious flaws, and tea party members roundly opposed it.

Although the law did serve to restrain spending for a few years, its flaws ultimately proved fatal.

Here, the Budget Control Act’s primary flaw came to bear: It didn’t create a single spending limit to cover everything, but instead created separate defense and nondefense categories, both of which were cut. This meant that sequestration did not distinguish between the vital work of national defense and the secondary activities, such as politically-driven business subsidies.

Defense-focused members of Congress constantly chafed at the spending limits. This gave leverage to members who desired ever-more domestic spending. As a result, Congress passed a series of bills to increase spending limits for both categories.

At first, these increases were somewhat modest and partially paid for to avoid growing the deficit. However, they established a precedent that would have devastating fiscal consequences.

The 2018 and 2019 spending deals were massive and undid much of the Budget Control Act’s deficit reduction. Rather than doing the hard work of prioritizing what areas to spend taxpayer dollars on, the McConnell-Schumer and Mnuchin-Pelosi deals threw away any pretense of federal self-control.

At the same time, Congress has also allowed “mandatory” programs such as Social Security, Medicare, and Medicaid to balloon. Each of these programs is growing at an unsustainable rate, and combined they threaten to crowd out core priorities such as national defense.

This brings us to a terrifying prospect: The deficit for 2020 is expected to exceed $1 trillion once more. Worse, the deficit is projected to stay above $1 trillion for the rest of the coming decade.

What makes this situation especially unconscionable is the strength of the economy. A time of low unemployment and no major wars is usually an occasion for low deficits and even balanced budgets. Instead, Washington is abandoning its responsibilities.

But it’s not too late for that to change.

A Path to Serious Reform

The Heritage Foundation’s “Blueprint for Balance” provides a comprehensive guide for responsible policymakers to bring the federal debt under control.

This includes making pro-growth tax reform permanent and expanding on good tax policy; strengthening budget rules to impose fiscal discipline and legislative accountability; reforming Social Security and federal health care programs to target benefits toward the most vulnerable while reducing costs; and eliminating wasteful and inappropriate spending on federal agencies and programs that fail to deliver on national priorities.

Taking this path would preserve individual liberty, strengthen the economy, and enable civil society to flourish. It would also restore fairness for younger and future generations that would bear the burden of the $23.1 trillion (and growing) national debt.