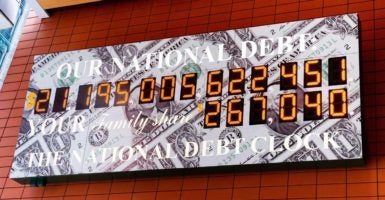 Whether there will be a government shutdown or not, younger generations would be saddled with yet more debt with the current spending proposals.(Photo: Michael Brochstein/Sipa USA/Newscom)

Discussion of the year-end continuing resolution, or spending deal, has hinged on two topics: whether additional funding will be provided for border security, and whether there will be a government shutdown.

Although the real-life impact of a partial government shutdown would be minimal, its prospect facilitates end-of-the-world rhetoric that the 24/7 news cycle thrives on.

What’s not talked about as much are the provisions legislators are sneaking into this bill to circumvent fiscal rules and continue racking up deficits on the backs of America’s children.

Tucked into the legislative text of this spending bill is language that would delay automatic cuts or sequestration of certain federal spending programs by at least one year.

The rule in question is referred to as Pay-As-You-Go, or PAYGO. PAYGO’s purpose is to make up for congressional deficit increases generated by changes to revenues and mandatory or entitlement spending from new legislation.

Ideally, budgetary points of order tied to PAYGO make it difficult to increase the deficit in the first place. The idea is that all new entitlement spending should be paid for and revenue reductions should entail spending reductions. Common sense for anybody living within a budget.

The way it works is simple: The Office of Management and Budget keeps a running tally of all of the deficit impact of legislation passed in a given year via a “scorecard.” If that scorecard shows a net deficit increase, this triggers an automatic spending reduction or sequestration of certain, nonexempt federal spending programs.

Since this Congress appears to be allergic to spending cuts of any kind, legislators sought it best to find a way to avoid the consequences of their violating the PAYGO rule.

The Congressional Budget Office score of the version of the spending bill that passed the Senate shows that it would cause a deficit increase as a result of renewing a handful of Medicaid provisions that were set to expire. While these provisions might reflect good policy, they add costs for federal taxpayers.

These Medicaid provisions would add $8 million in 2019 and $63 million from 2019 through 2023 to federal deficits. Without pursuing offsetting spending reductions or generating new revenue to pay for the costs of these provisions, these would normally be added to the PAYGO scorecard.

The spending bill not only keeps the Medicaid-related deficits off the scorecard, but it also directs the current scorecard balance to be shifted into the next fiscal year; thereby delaying automatic spending cuts until at least the following year. Although not quite as drastic as erasing the scorecard completely, this kick-the-can approach is still deeply troubling.

On Capitol Hill, $63 million is an amount of money too many legislators shrug at. After all, they are spending other peoples’ money. More specifically, this represents the combined income of over a thousand typical Americans working for an entire year.

Not content with deficit increases in the millions, the House version of the bill adds $4.1 billion in funding for border security and $7.8 billion for disaster relief, or just under $12 billion of new deficit spending.

While the administration has been consistent in making the case for the border initiative, that spending should easily be able to fit within the swollen spending caps. Rather than make the effort to reduce other spending items and live within the caps, the House has chosen to simply ignore the caps altogether.

Meanwhile, the disaster funds follow a tired pattern of pretending as though emergency spending is free. The dismissive treatment of emergency costs is seen in the lack of oversight and planning for events such as coastal hurricanes and Western wildfires that happen annually.

Placed into perspective, this near $12 billion in off-the-cuff deficit spending would be the equivalent of over four months of economic activity for the entire state of Vermont.

In sum, the spending bill busts the budget even more by delaying automatic spending cuts, keeping new mandatory spending on Medicaid provisions off the PAYGO scorecard, and blowing up an already inflated discretionary budget even further with additional emergency spending that is not paid for.

There is a fiscally responsible way to fund the federal government and secure the border. Neither the House nor Senate chose this path. Whether there will be a government shutdown or not, younger generations would be saddled with yet more debt.