2020 NDAA Represents a Big Step Forward in Rebuilding Our Military 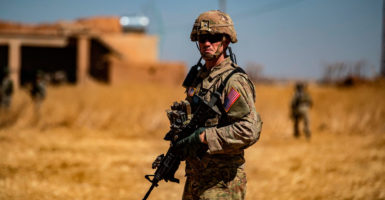 The NDAA will provide a 3.1% pay increase to military personnel. Pictured: A U.S. soldier stands guard during a joint patrol with Turkish troops in the Syrian village of al-Hashisha on the outskirts of the town of Tal Abyad along the border with Turkish troops Sept. 8, 2019. (Photo: Delil Souleiman/AFP/Getty Images)

It represents a big step in the right direction in the long process of rebuilding our military. As the Index of U.S. Military Strength shows, it will take a military of sufficient quality and size to defend and promote American interest abroad, mainly in the context of renewed great power competition.

Both the House and the Senate passed their versions of the National Defense Authorization Act, or NDAA, back in the summer.

However, because the House version of the usually bipartisan NDAA was burdened by a lot of progressive policies not much related to actual national defense, it took longer than usual to resolve the differences between the bills.

The House version was passed with no Republican votes. And in order to obtain enough votes to secure passage in the House, the bill was jammed with a variety of last-minute amendments to appeal to all elements of the House majority.

These amendments ranged from making it harder for the Pentagon to transfer money between different accounts to changing the policy on transgender individuals in the military to burdening the Department with climate change-related studies.

During negotiations, the Senate Armed Services Committee chairman, Sen. James Inhofe, R-Okla., was able to mitigate most of the progressive and non-germane provisions and bring the NDAA back to the bipartisan Senate center.

The Senate NDAA left the chamber with ample bipartisan support, with only 8 votes against and 86 in favor. The final vote in the Senate was again 86-to-8.

The Conference version of the NDAA ultimately agreed to by both chambers included a provision that would grant civilian federal workers 12 weeks of paid leave. That is a policy that, regardless of merit, should not have been placed in the NDAA, since it governs all federal workers.

However, the good heavily outweighs the bad in the NDAA.

The authorization bill sets the Pentagon’s budget at $738 billion, which represents a $22 billion increase over last year’s. This funding level represents a necessary increase to rebuild our military for the challenges outlined in the National Defense Strategy.

The NDAA also will provide a 3.1% pay increase to military personnel, much-needed to augment the Pentagon’s efforts in recruiting and retention.

The bill creates the Space Force, which is needed to keep pace with Russia and China’s efforts in threating American space assets.

When it comes to air assets, the NDAA authorizes the Pentagon to increase the procurement rate of the F-35, a welcome production increase. The bill did, however, also authorize the procurement of the F-15EX, a platform that will not be adequate for the high-end type of conflict outlined in the National Defense Strategy.

On the Navy side of the bill, the NDAA authorizes 14 new ships, which will help get the U.S. closer to its 355-ship naval force. It also provides funding for initial items that will part of the mid-life refueling process of the Truman aircraft carrier.

The passage of the bill and the announced agreement on appropriations for the rest of the fiscal year will mean that the Pentagon will be able to start 79 programs and increase production in 39 programs which were stalled because of the multiple continuing resolutions to start the fiscal year.

All in all, the 2020 NDAA represents a good step forward in rebuilding our military and it shows that there is a robust bipartisan commitment to a strong national defense.