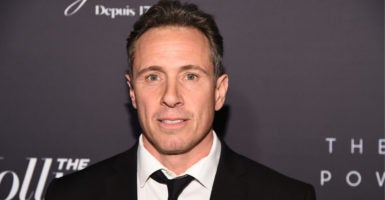 President Trump is "lying to you about the report. Please, do yourself the favor, do the homework. He's lying to you," said CNN's Chris Cuomo, pictured at The Hollywood Reporter's annual Most Powerful People in Media April 11, 2019. (Photo: Theo Wargo/Getty Images)

Tucker Carlson currently hosts Fox News’ “Tucker Carlson Tonight” and is the author of "Ship of Fools: How a Selfish Ruling Class Is Bringing America to the Brink of Revolution." Previously, he co-hosted “Fox & Friends Weekend." With Patel, he co-founded The Daily Caller, and The Daily Caller News Foundation.

Neil Patel is co-founder and managing director of Bluebird Asset Management, a hedge fund investing in mortgage-backed securities. He previously served in the White House from 2005 to 2009 as the chief policy adviser to Vice President Dick Cheney.

Thanks to the Justice Department inspector general’s report, we now know for certain what has been, for those paying attention, fairly obvious.

The Steele dossier played a central role in the genesis of the Russia hoax and was used to justify extensive spying on former naval officer and Annapolis graduate Carter Page.

The top two leaders of the FBI were closely involved in this fiasco. Other powerful people knew what was happening and lied to cover it up. That all was confirmed by the inspector general’s report. The report was a disaster for the credibility of top leaders in former President Barack Obama’s FBI, and it’s also a big problem for the American news media.

For example, in early 2018, Washington Post intelligence and national security correspondent Shane Harris lectured Kim Strassel of The Wall Street Journal about how little she knows about the story.

“Yes,” he wrote, “I am telling you the dossier was not used as the basis for a FISA warrant on Carter Page.” That’s false. And yet, Harris hasn’t apologized or even acknowledged his incompetence.

Or take NBC News’ so-called intelligence correspondent, Ken Dilanian. In the summer of 2018, he smugly tweeted, “Trump is wrong about Carter Page, the dossier and the FISA warrant.” But it looks like President Donald Trump was right, and he was wrong.

“CNN Newsroom” anchor and chief national security correspondent Jim Sciutto did admit the Steele dossier might have been used for the warrant. But don’t be impressed. He lectured readers that “the FBI would corroborate information in the dossier on its own before using such intel to justify the FISA warrant.”

Of course, that didn’t happen. In fact, the FBI hid information showing the dossier was false. Did Sciutto issue a correction? Of course not. But it does seem a little unfair to focus on Sciutto. He was merely following the lead of almost everyone else at CNN, all of whom were frantically trying to convince us that the dossier was irrelevant:

Everything you just read turned out to be wrong. Has CNN retracted the comments or apologized? That’s a rhetorical question. Apologies require introspection and integrity. At CNN, they’re doubling down. CNN’s Don Lemon explained that, by definition, everything CNN reported was true.

Lemon: “So, how is the White House and the Republican Party dealing with the articles of impeachment and an inspector general report that debunked conspiracy theories? Gaslighting. … The FBI obtained proper warrants. You should read the report. Facts first. None of that is true. The report found that the launch of the Russia investigation was legally sound, unbiased, and that no spying occurred.”

Cuomo: “‘Trump is the victim.’ All right, that was what was promised from this IG’s report, 476 pages. No Trump as victim. Trump even says that that’s what this says. It doesn’t. He’s lying to you about the report. Please, do yourself the favor, do the homework. He’s lying to you.”

Do the homework, demands Cuomo. Read the IG report! But you have to wonder if Cuomo himself read the report. Or did his assistant promise to read the report and give him a summary, but then got stuck in a super-long holiday season line at Starbuck’s and forgot to do it? And then maybe, in a last-minute panic, which is understandable under the circumstances, told a few white lies to Cuomo about what the report says?

We’re not sure that’s what happened of course, and we’re not going to judge. We can surmise that, unless he’s a pathological liar, Cuomo didn’t read the IG report himself.

Otherwise, he wouldn’t be able to sit in a TV studio, stare into the camera, and pretend that the Justice Department’s inspector general just confirmed what CNN has been telling you for three years. Because that is absolutely not what happened. Not even close.