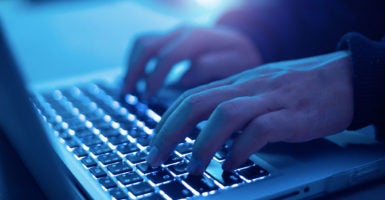 Too many people, including Christians, know how deadly pornography can be—to relationships, children’s innocence, and the thousands of women lured into an industry that exploits, demeans, and ensnares them. (Photo: seksan Mongkhonkhamsao/Getty Images)

What kids think is normal will shock and sober you. Because these aren’t Playboy magazines stashed under a teenage boy’s bed. These are raw, violent, and nauseating videos that they don’t have to sneak into a store for. Every time they hold a cellphone or log onto a laptop, the door is open to a life-changing experience that could kill the relationships in their lives forever.

They don’t realize that these are actors who are being exploited for an industry that’s tied to the dark world of sex trafficking, domestic violence, child abuse, and abortion. They don’t realize that this is a sinister trade that’s teaching men to dehumanize women, leading spouses to stray from marriages, and killing love and intimacy the world over.

Like a lot of parents, he’s amazed at how much they’re in front of a screen or on the internet watching YouTube videos.

“As much as my wife and I try to police the amount of time they’re in front of a screen,” Banks says, “we find that there are some times we just can’t stop it. That’s just a part of the era that we’re in. And I’m horrified when I read stories or see statistics about the prevalence of obscene pornography that’s so readily available that our kids, even at a young age. … That’s why I led this letter.”

For eight years, conservatives such as Banks watched the Obama administration look the other way on pornography cases. In 2010, the Justice Department quietly closed the doors on the Obscenity Prosecution Task Force, which was prosecuting hard-core offenders.

It’s time, Banks insisted, to bring the issue back and make it a priority.

Together with Reps. Vicky Hartzler, R-Mo.; Mark Meadows, R-N.C.; and Brian Babin, R-Texas, Banks is asking Attorney General William Barr to start cracking down on a cancer that’s destroying our country from the inside out.

“Attorney General Barr can declare the prosecution of pornography a criminal justice priority. He hasn’t done that yet,” Banks explained. “I’m not attacking him or the administration. He’s new to the job, and he has a lot of other issues on his plate—like this impeachment fiasco … But he can direct the U.S. attorneys to investigate and bring prosecutions against the major producers and distributors of obscene pornography, just like he did [as attorney general] under President George H.W. Bush. That’s what we’re hoping that our letter will motivate him to do.”

Luckily, the president’s team wouldn’t have to start from scratch. As Banks pointed out, there are already laws on the books to outlaw the worst kinds of material. The problem is, no one’s enforcing them. And at a time when the states are lining up to declare pornography a public health hazard, it only makes sense for the administration to do the same.

Too many people, including Christians, know how deadly pornography can be—to relationships, children’s innocence, and the thousands of women lured into an industry that exploits, demeans, and ensnares them. It affects our playgrounds, our politics, even our pulpits.

There is a deep spiritual component to this crisis that’s corrupting people’s hearts and minds. It ties us up to the point that we’re not effective in our families. We’re not effective in the kingdom. And it stops us from speaking truth because we’re convicted of ourselves.

But we also had the privilege of hosting one of the most authoritative voices on the subject, Josh McDowell. I strongly urge you to take the time to watch and share what he had to say at one of our recent pastors’ conferences. It just might change your life.