The Several Meanings of the Conservative Victory in the UK 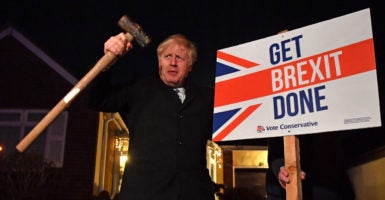 Britain's Prime Minister Boris Johnson poses after hammering a "Get Brexit Done" sign into the garden of a supporter during a campaign stop on Dec. 11 in Benfleet, United Kingdom. (Photo: Ben Stansall/WPA Pool/Getty Images)

That’s the main takeaway of the Labour Party’s stunning defeat Thursday in the British general election, with some polls suggesting it has won its fewest seats in Parliament since 1935.

The socialists thought they could win a majority in Parliament by leaning far left and promising to reverse then-Prime Minister Margaret Thatcher’s privatization reforms of the 1980s. The Labour Party called for the large-scale nationalization of rail, mail, water, and electricity.

The British people were not buying it, and gave Conservative Boris Johnson a large majority and a go-ahead to exit the European Union.

It appears that the Conservatives won more seats than in any election since Thatcher won for a third time in 1987.

The decisive rejection of a socialist agenda stunned the Democratic Socialists of America, who went all out for their comrades in Britain, working long-distance through phone banks in New York City and elsewhere to turn out the vote for the Labour Party.

The Democratic Socialists of America thought that a socialist victory in the U.K. could be the forerunner of a similar outcome in the U.S.

Now, it’s forced to ask whether its grand plan to build a socialist future in America has just become a chimera. Is Labour’s near-landslide defeat an indicator of what would happen if the Democratic Party tried to run on an uncompromising socialist platform?

Such questions are certain to affect, even materially, the presidential nomination process of the Democrats.

Some observers saw parallels between the Conservative Party’s winning seats in England’s north and Midlands that have been Labour’s for decades and President Donald Trump’s capture of “safe” Democratic districts in Pennsylvania, Wisconsin, and Michigan. British Tories, for example, won the town of Workington, which Labour had held almost without exception since 1918.

The Wall Street Journal editorialized that Labour’s “thumping” was a warning to American Democrats “who think left-wing populism is the way to defeat Donald Trump’s right-wing populism.”

Based on an early examination of the British returns, American conservatives feel confident that, just as the British voter was unmoved by the siren song of socialism, so too will the common sense of American voters lead them to a rejection of the Democratic Socialists of America’s neo-Marxist platform.

Whatever a voter might say about preferring to live under socialism rather than capitalism, it’s a long way from a pollster to a polling place.