Conservative Blowout in Britain Puts Brexit Back on Track 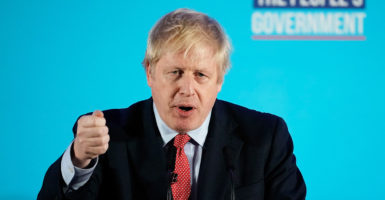 British Prime Minister and leader of the Conservative Party Boris Johnson speaks to supporters and press as the Conservatives celebrate a sweeping election victory on Dec. 13, 2019. (Photo: Christopher Furlong/Getty Images)

Though the last votes are still being counted, it is clear that Britain’s Conservatives have won an overall majority in Thursday’s general election.

Conservatives, led by Prime Minister Boris Johnson, will be the largest party in Parliament and will be able to form a government that controls the House of Commons.

The Conservatives have won for a number of reasons.

Most fundamentally, the Brexiteers won the 2016 Brexit referendum by a 52% to 48% majority, but since then, neither side has been able to build on their share. The Conservatives ran on the need to “Get Brexit Done,” and this appears to have won over enough formerly Labour voters to take a clear victory.

Labour, by contrast, ran a far-left campaign that tried to avoid the issue of Brexit while promising taxes for the few and goodies for the many, making it a classic giveaway campaign.

With Labour on course for its worst showing since the 1930s, it’s clear that this approach was a failure. Brexit has redrawn the political map of Britain.

The Conservatives’ victory, however, doesn’t mean they ran as defenders of the free market. The Conservatives were certainly far better than Labour, but even they are proposing to spend more on health care, education, police, and infrastructure. Even though taxation in Britain is at an all-time high, no party shows any interest in reducing it.

For the U.S., the outcome of the British elections is encouraging. Unlike in the recent Canadian election, an Anglosphere conservative party has successfully converted a plurality of votes into a majority of parliamentary seats.

The likely result is an end to Britain’s political stalemate, with the Conservatives now both in office and truly in power.

That, in turn, means that Britain is likely to exit the European Union on the new deadline of Jan. 31, 2020, and that Britain and the U.S. will be able to negotiate a free trade agreement in the foreseeable future.

Free trade was one of the few genuinely free-market commitments made by the Conservative Party, so the Conservative win is good news for U.S.-U.K. relations and for the transatlantic economy alike.

As the Conservatives wrap up their victory, it will bring forward new challenges.

There will be a new threat to the British Union from the resurgent Scottish Nationalist Party, who have long pushed for Scottish independence. Bringing Brexit to a successful conclusion will also risk opening old Conservative wounds. And if the Labour Party moves even further left in response to its defeat, the next election will be even more full of peril than this one was.

But right now, those are worries for tomorrow. The fact appears to be that the Conservatives under Johnson took the brave but necessary gamble of demanding an election to end the political stalemate in Westminster.

That gamble has paid off.