If Jeremy Corbyn Wins, Britain Will Move in a Socialist Direction 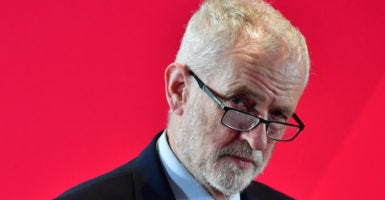 If the Labour Party wins a majority, its leader, Jeremy Corbyn, has promised to move Britain in an openly socialist direction, undoing many of the Margaret Thatcher privatization reforms of the 1980s. Pictured: Corbyn addresses the audience at the University of Lancaster Nov. 15, 2019, in Lancaster, England. (Photo: Anthony Devlin/Getty Images)

The outcome of the British Parliamentary elections on Dec. 12 may not interest very many Americans. But it could have a measurable impact on U.S. presidential politics.

If the Labour Party wins a majority, its leader, Jeremy Corbyn, has promised to move Britain in an openly socialist direction, undoing many of the Margaret Thatcher privatization reforms of the 1980s. That result would be hailed by Sen. Bernie Sanders, Vermont independent, an ideological soulmate of Corbyn.

If Corbyn is victorious, one British analyst suggested, “It will be one of the strongest indicators that people-powered movements can win the day and that Americans might also finally be ready to back a socialist candidate.” However, British polls taken in the final days of the campaign gave the Conservative Party’s Boris Johnson a comfortable 10-12 point lead.

Even more interested in the outcome is the Democratic Socialists of America, which seeks to move the Democratic Party to the left. The DSA has been working closely with Momentum, a British group formed to radicalize Labour. A Corbyn victory would transform both organizations into nascent kingmakers.

“Momentum has influenced a contingency within the Democratic Socialists of America … for quite some time,” according to Julia Salazar, a DSA-endorsed activist who last year won a seat in the New York state Senate. “There are real parallels with the leftward shift in Labour and the insurgence and resurgence of socialists in the Democratic Party.”

Typical of the interchange between Momentum and DSA is that Adam Kung, a co-founder of Momentum, now works in the United States for the Social Practice, founded by two Sanders campaign aides.

Momentum is seriously socialist. It has proposed nationalizing Britain’s broadband infrastructure (the internet) and industries like water, rail, the postal service as well as sharply raising personal and corporate tax rates. It favors abolishing private education and adoption of the Green New Deal—“this is about reshaping the entire economy over the course of 10 years.”

It is hard to understand, remarked the editor of the socialist journal Notes from Below, “how we aim to get to socialism, a process of systemic transformation, without the framework of the Green New Deal as a guiding light.”

Momentum’s influence is startling, given it was founded only four years ago and is recasting the Labour Party into what The Wall Street Journal called “a socialist movement that backs state intervention on levels unseen in the U.K. since the 70s.”

Probably with a straight face, the left-wing magazine The Nation compared Sanders and Corbyn to Ronald Reagan and Thatcher, suggesting that just as a conservative alliance between the United States and the United Kingdom emerged in the 1980s, so could a socialist alliance in the 2020s, this time between “revolutionaries” like Sanders and Corbyn. If Corbyn is indeed 10 points behind and Sanders continues to lag in the polls, the alliance is unlikely to form.

But Momentum and DSA are led by radicals on fire to change the world. They should not be dismissed lightly. They will not be deterred if Corbyn and Sanders are defeated. No, they will continue to press for a world in which, according to Momentum founder Jon Lansman, the Marxist philosopher Antonio Gramsci will be given a place of honor, along with the writings of Lenin, Trotsky, and Stalin.

How do we know? Through the photos of Lansman’s $2 million “pad,” as viewed on British TV’s “Through the Keyhole.”

If Corbyn manages to win, we may all get a much closer look—whether we want to or not.

This was originally published in The Washington Times.