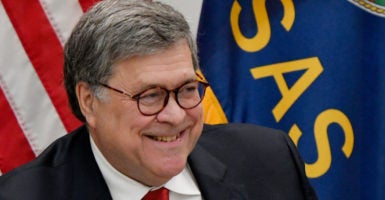 In a recent speech, Attorney General William Barr encapsulated the severe damage being done to the remarkable and extraordinary experiment in self-rule that the Framers of the Constitution created in 1787. Pictured: Barr speaks at the Kansas Bureau of Investigation Forensic Science Center on Oct. 2, 2019, in Topeka, Kansas. (Photo: Ed Zurga/Getty Images)

Watching the hysterical reaction of the radical left—such as Ruth Marcus of The Washington Post—to Attorney General William Barr’s thoughtful, well-reasoned, important speech at the Federalist Society convention on the constitutional doctrine of the unitary executive is like history repeating itself.

Liberals had the same overreaction to then-Attorney General Edwin Meese’s 1985 speech to the American Bar Association on the Constitution and originalism.

Only someone as openly partisan and ill-informed as Marcus could possibly claim that a speech explaining the historical basis of the Founders’ views on the importance of a strong executive is “angrily partisan” and “scary.” So what did Barr say that was so alarming to liberals?

First, he cited President Donald Trump’s praise of Meese as one of the “most eloquent champions for following the Constitution as written.”

Praising Meese and originalism is anathema to liberals who believe in a “living” Constitution that can be bent, twisted, and broken by ideological judges to fit their view of what an American utopia should look like, ignoring rights they don’t want (like the Second Amendment) and creating nonexistent rights they do want (like the court-created abortion “amendment” in the Bill of Rights).

But Barr’s real crime in his November speech was detailing the damage being done to the Constitution by Congress and the courts usurping presidential authority.

The American presidency, Barr said, is “one of the great, and remarkable innovations in our Constitution.” It has been “one of the most successful features of the Constitution in protecting the liberties of the American people.” The “steady encroachment on presidential authority” has “substantially weakened the functioning of the executive branch, to the detriment of the nation.”

Many historians mistakenly believe the American Revolution was a rebellion against “monarchical tyranny” and that the Founders wanted a weak executive. By that time, though, the British Parliament had “effectively neutered” the monarchy.  In fact, as Barr explained, the Founders understood that their “prime antagonist was an overweening” legislature, a view strengthened by a weak executive during the American Revolution as well as under the Articles of Confederation.

Thus, said Barr, the Founders wanted a strong executive who could “act with energy, consistency, and decisiveness.” As Thomas Jefferson put it, for “the prompt, clear, and consistent action so necessary in an Executive, unity of person is necessary.” And so we have the constitutional doctrine of the unitary executive.

Barr pointed out that one of the “more amusing aspects of modern progressive polemic is the breathless attacks” on the unitary executive as if this doctrine is something new that justifies “executive power of sweeping scope.” But this is also wrong.

Not only isn’t the unitary executive a new idea, but rather than pertaining to “the breadth of presidential power,” it simply means that that the powers  of the executive branch, whatever they are, “must be exercised under the president’s supervision.”

Thus, when Congress encroaches on the authority of the executive branch by vesting the “power to enforce the law in someone beyond the control of the president, it contravenes the Framers’ clear intent to vest that power in a single person, the president.” So much, says Barr, “for this supposedly nefarious theory of the unitary executive.”

Barr is deeply concerned that “there has been a steady grinding down of the executive branch’s authority” that damages the ability of the president to carry out his constitutional duties and to protect the liberty and freedom of the American people. With Trump’s election, his opponents launched what Barr called “The Resistance,” an explicit strategy to use “every tool and maneuver available to sabotage the functioning of his administration.”

The word “resistance,” points out Barr, is the word used to “describe insurgency against … an occupying military power” and it “connotes that the government is not legitimate.” Barr warns that this is “a very dangerous—indeed incendiary—notion to import into the politics of a democratic republic.”

Instead of acting as the “loyal opposition” as political opponents have done throughout our history, Trump’s opponents are “engaged in a war to cripple, by any means necessary, a duly elected government.”

This includes the Senate’s “unprecedented abuse of the advice-and-consent process” that is intended “to delay the confirmation process” so the president can’t have a “functional government.”

Congress also has “largely abdicated its core function of legislating on the most pressing issues facing” our country. Even when it does legislate, it punts “the most difficult and critical issues” by “broad delegations to a modern administrative state that they increasingly seek to insulate from presidential control.”

All this gives Congress the time to “drown the executive branch with ‘oversight’ demands for testimony and documents.” Barr acknowledges congressional oversight authority but says that the “sheer volume” of investigations today is meant to “incapacitate the executive branch,” something members of Congress brag about.

Barr doesn’t just take Congress to task—he also goes after the judicial branch. In fact, he says that the federal courts are “the prime source of the erosion of separation-of-power principles” and “executive branch authority.”  The steady encroachment by judges “has substantially undercut the functioning of the presidency.”

By appointing themselves “the ultimate arbiter of separation of powers disputes between Congress and executive,” they are “preempting the political process” and usurping presidential authority in areas that are “considered at the core of presidential power.”

That includes substituting their judgments for the president’s in areas “that only a few decades ago would have been unimaginable—such as matters involving national security or foreign affairs.”

The travel ban case is a good example of that, says Barr, where the lower courts ignored an “explicit legislative grant of authority” to the president, as “well as his constitutional national security role.”

An “especially troubling aspect” of this expanded judicial power is the courts now looking into the “subjective motivation behind governmental action,” something the Supreme Court has traditionally refused to do.  Judicial review in the past has focused on executive action, not executive motive.

Barr charges that the courts are now acting “like amateur psychiatrists attempting to discern an executive official’s ‘real motive’—often after ordering invasive discovery in the executive branch’s privileged decision-making process.” The attorney general says that has “no more foundation in the law than a subpoena to a court to try to determine a judge’s real motive for issuing its decision.”

All of this has been made much worse by another “judicial innovation”—the nationwide injunction, which has “no foundation” in the law and “radically” inflates the otherwise limited power of district court judges.

This also happened in the George W. Bush administration, according to Barr, when the Supreme Court, after 9/11, “set itself up as the ultimate arbiter and superintendent of military decisions inherent in prosecuting a military conflict.”

The high court has wrongly taken “the rules that govern our domestic criminal justice process” and “superimposed them on the Nation’s activities when it is engaged in armed conflict with foreign enemies.” This runs “roughshod” over the Constitution and the role played by the president as the commander in chief.

Barr points out the absurdity of the idea that the Constitution, intended to protect the rights of the American people, confers “rights” on our foreign enemies.

Barr charges that the president’s opponents constantly accuse him of “waging a war on the rule of law” and “shredding” the Constitution. But when Barr asks them to explain what they are referring to, all he gets are “vacuous stares, followed by sputtering about the travel ban.”

It is the left that is actually shredding constitutional norms and “undermining” the rule of law with its “scorched earth, no-holds-barred war of ‘resistance’ against this administration” says Barr.

Unfortunately, “so-called progressives treat politics as their religion” and their “holy mission” is to “use the coercive power of the state to remake man and society in their own image, according to an abstract ideal of perfection.”  They are willing “to use any means necessary” to achieve those ends, posing a danger to our freedom and liberties.

Fortunately, conservatives don’t think that way because they don’t “seek an earthly paradise.” They are “interested in preserving over the long run the proper balance of freedom and order necessary for healthy development of natural civil society and individual human flourishing.” Thus, conservatives “have more scruple over their political tactics and rarely feel the ends justify the means.”

Barr ends his speech with a call to “not allow the passions of the moment to cause us to permanently disfigure the genius of our constitutional structure.”

Over our history, it has been the presidency that has “provided the leadership, consistency, energy, and perseverance that allowed us to surmount” the challenges we have faced as a nation. It “has brought to our republic a dynamism and effectiveness that other democracies have lacked.”

This was, without doubt, the most important speech given by an attorney general since Meese put us back on the road to restoring the original understanding of the Constitution in 1985.

Barr encapsulated the severe damage being done to the remarkable and extraordinary experiment in self-rule that the Framers of the Constitution created in that long, hot summer of 1787.  That damage has been going on for decades, but it has accelerated exponentially during the Trump administration.

Progressive activists and the president’s opponents in Congress, the judiciary, and inside the executive branch itself are so intent on destroying Trump that they are willing to burn down our republic to do it.