A Pro-Growth Alternative to the Left’s Tax Hike Agenda 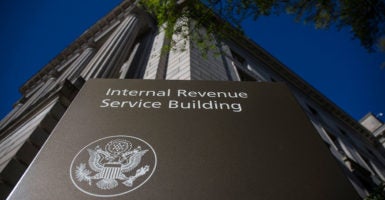 Conservatives need to push for a second round of tax relief that will let workers keep more of their money, make it easier to save and invest through a universal savings account, and remove remaining barriers to business investment. (Photo: Zach Gibson/Getty Images)

That runs counter to the consensus of those on the left, who want large increases in federal spending and dramatic tax increases to pay for them. Their plans are so expansive that it will require both middle-class payroll tax hikes and broad new taxes on American savers, investors, and employers.

Opposing that growth-killing agenda isn’t enough. Conservatives need to draw a stark contrast and push for a second round of tax relief that will let workers keep more of their money, make it easier to save and invest through a universal savings account, and remove the remaining barriers to business investment.

Lower taxes and reduced red tape have helped fuel a middle-class boom. Wages are growing for Americans at every income level—especially among the lowest-income workers. Jobs are plentiful, unemployment is consistently low, and workers are more satisfied and more secure in their jobs than they have been in decades.

But if Congress and President Donald Trump really want to lock in prosperity, they must pursue both lower taxes and smaller government.

Tax Reform 2.0 must make the 2017 changes permanent and establish credible, offsetting spending reforms. Each dollar that Washington stops wasting can be plowed into deeper income tax cuts for all taxpaying Americans.

The benefit of tax cuts paired with spending cuts is that the combination is even better for the economy than tax cuts alone. Deficit-financed tax cuts leave a lingering worry that taxes will have to increase again, undermining their potential benefits. As Treasury revenue increases from higher wages and more business activity, those funds can be plowed back into working down the government’s debt and funding subsequent tax cuts.

Universal savings accounts are the conservative alternative to the left’s desire to raise capital gains taxes on American investors. The accounts reduce taxes on savings and help families build financial security through a single, simple, and flexible savings account.

They work like turbocharged retirement savings accounts without the complicated Washington-imposed rules. Ordinary Americans could deposit after-tax income into their savings accounts, and the earnings would grow tax-free.

American employers are also in the crosshairs of the tax-and-spend progressive agenda. The left has proposed some of the highest and most complicated business taxes in the world.

Keeping business taxes low so that American workers remain competitive and wages can keep rising is a good first step. But conservatives can also champion business expensing, an equally important benefit for U.S. workers that provides the foundation for sustained wage growth and long-term productivity gains.

Finishing the 2017 reforms to expensing is the most pro-worker reform Congress could undertake. The reform simply lowers taxes on American businesses’ tangible investments, such as new tools and upgraded machinery.

The last round of reform still excluded the benefit of expensing from certain investments, such as manufacturing floor space and storefronts. Conservatives should champion expensing for all investments to better help American workers compete in a global economy.

Economic opportunity flourishes when the D.C. swamp is receding. Cutting taxes and restraining spending can solidify and expand the gains Americans currently enjoy.