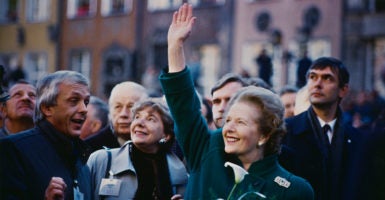 When all you have is a social justice hammer, everything looks like an identity politics nail.

At least, that’s what former Secretary of State Hillary Clinton made clear this week.

While promoting her new book Tuesday, “The Book of Gutsy Women,” co-authored with her daughter Chelsea Clinton, the two-time presidential candidate explained why they chose not to include former British Prime Minister Margaret Thatcher: She didn’t do enough as prime minister to break down barriers for women.

“She doesn’t fit the other part of the definition in our opinion, which really is knocking down other barriers for others and trying to make a positive difference,” opined Clinton of the U.K.’s first female prime minister, when asked by a confused host, Emma Barnett, about Thatcher’s absence.

Maybe the Clintons are ignorant of Lady Thatcher’s track record, or perhaps they simply don’t care.

Either way, Clinton’s snub of Thatcher is, should we say, deplorable?

When Thatcher took the reins in London in 1979, the U.K., like the U.S. at the time, was stuck in a period of national malaise. Unemployment was high, national pride was down, and the Soviet threat remained ever-present.

Thatcher’s leadership turned things around completely. From 1979 to 1997, when the Labour Party regained the premiership, the British middle class grew by 17 percentage points. Home ownership grew 18 points. The number of self-employed workers doubled.

On the world stage, Thatcher famously stood shoulder to shoulder with President Ronald Reagan, reinvigorating the U.S.-U.K. special relationship. Reagan and Thatcher together faced down the Soviet Union and brought the regime in Moscow to its knees.

Thatcher refused to back down against an Argentinian dictator intent on violating international law and seizing the Falkland Islands—British sovereign territory. And she consistently stood up to the bureaucrats in the European Union, and fought tirelessly for British sovereignty and self-determination.

And, while Clinton falsely claimed in 2008 to have landed “under sniper fire” in Bosnia in 1996, Lady Thatcher survived an actual attempt on her life in 1984 in the Brighton hotel bombing.

This is the legacy the Clintons viewed as unworthy of inclusion in their work on courageous women.

Even playing by Clinton’s own rules, Thatcher fits the definition of a “gutsy woman.”

Following her 2008 primary loss to Barack Obama, Clinton told her supporters, “Although we weren’t able to shatter that highest, hardest glass ceiling this time, thanks to you, it’s got about 18 million cracks in it. And the light is shining through like never before, filling us all with the hope and the sure knowledge that the path will be a little easier next time.”

In 2016, upon winning the Democratic nomination, Clinton told the Democratic National Convention, “I can’t believe we just put the biggest crack in that glass ceiling yet.” Indeed, a core thrust of her candidacy was this very issue.

Shattering that ceiling is a central part of Thatcher’s legacy. Upon her passing in 2013, then-Canadian Prime Minister Kim Campbell—Canada’s first female head of state—remarked on her legacy in this regard, saying it perhaps better than anyone else could:

But she really just, I think, opened up a space for women in other countries to be credible as leaders, that there were things you didn’t have to compromise anymore, that this notion that you could not be tough and still be feminine, that there would be somehow some way that you weren’t really a woman if you wanted to lead a country, or if you were prepared to send people into battle. It just wasn’t the case, and she just established that once and for all.

So then, on what basis can the Clintons deny even the most basic respect to Lady Thatcher?

As my friend and colleague Nile Gardiner told Fox News Wednesday, the answer seems to be “liberal bias and liberal intolerance.”

Thatcher, he says, “undoubtedly has been the most important woman leader of modern times by a mile,” a leader who “had an incredibly positive impact not only for women but for everybody, for all the people of Great Britain and for the entire free world.”

Indeed, and you have to wonder: If Thatcher had championed the “correct” political affiliations and causes, would her legacy be celebrated by the left today?

Fortunately, there are still millions around the globe, especially in the U.S. and U.K., who remember this legacy, and fight every day to continue the work she started.

Her bravery was unmatched, her leadership unquestioned, her legacy undimmed.

The world recognizes it. It’s unfortunate the Clintons choose not to.