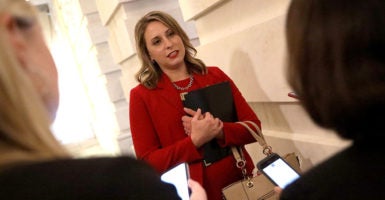 Rep. Katie Hill, D.-Calif., answers questions from reporters at the U.S. Capitol following her final speech on the floor of the House of Representatives Oct. 31, 2019, in Washington, D.C. (Photo: Win McNamee/Getty Images)

Freshman Rep. Katie Hill resigned Thursday in the wake of multiple controversies, including engaging in at least one sexual relationship with a campaign staff member.

Hill should not have engaged in a relationship with a subordinate while holding public office, and thus should shoulder the blame for that choice. Nonetheless, there’s little the public can do about her personal choices other than to call for her resignation.

There may be more at stake in the other unsettling aspect of this viral story—the publication of her personal nude photos, supposedly leaked by her estranged husband. (He is now claiming he was hacked.)

The left has largely ignored Hill’s problematic relationship with a subordinate—despite liberals’ normal assumption that any such action violates standards in the #MeToo era.

It’s a crime rarely punished, and one that only seems to affect women, especially in an age where everyone has a smartphone and taking “selfies” is the norm.

In her resignation speech Thursday, Hill said she thinks that wouldn’t have happened to a man.

I will never shirk my responsibility for this sudden ending to my time here but I have to say more because this is bigger than me. I am leaving now because of a double standard. I am leaving because I no longer want to be used as a bargaining chip. I am leaving because I didn’t want to be peddled by papers and blogs and websites used by shameless operatives for the dirtiest gutter politics that I’ve ever seen and the right wing media to drives clicks and expand their audiences by distributing intimate photos … taken without my knowledge let alone my consent for the sexual entertainment of millions.

It’s irresponsible for any outlet—right- or left-leaning—to publish photos of a person for the sole purpose of humiliation and embarrassment. There might be a place for steamy news in the entertainment industry, but surely we can agree, regardless of partisan views, that posting a nude “selfie” of a person without the person’s permission—especially when leaked specifically to exact revenge—does not fall into that category for a political or news organization.

A picture might be worth a thousand words, but in cases like Hill’s, publications should refuse to publish such clickbait, and tell the salacious story, if it’s legitimately newsworthy, via old-fashioned reporting.

Publications aren’t running the photos to reveal a notable person’s questionable character, because a simple factual story would accomplish that. Rather, they are doing it for no other reason than to get clicks.

It’s low-hanging fruit, and it needs to stop.

Paul Larkin Jr., a legal research scholar with The Heritage Foundation, examined the issue from a legal and societal perspective.

The posting of such images on a website has seriously harmed some victims by leading to a debilitating loss of self-esteem, crippling feelings of humiliation and shame, discharge from employment, verbal and physical harassment, and even stalking.

Those harms are multiplied if, to use the vernacular, the images “go viral” and are repeatedly circulated across the internet and from cellphone to cellphone.

Some young women have committed suicide after being victimized by the widespread distribution of their nude pictures or, in one case, being tormented by fellow high school students.

When one considers the consequences of publishing revenge porn—including engaging in an illegal activity and tarnishing the reputations of nearly everyone involved—it’s clear the practice is indefensible.

The media can’t control poor choices political figures make in terms of public policies, professionalism, or personal relationships, but they can control what they write and what they publish about them, and why.

It’s important to hold our politicians accountable—but when it comes to such intimate photos, the goal should be to avoid public exposure and instead pursue justice through other means.