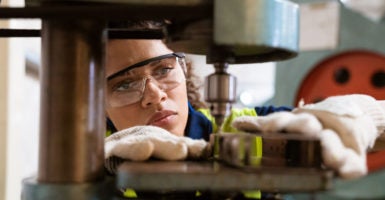 In October, 128,000 jobs were added—about 8,000 fewer jobs than were added in September. (Photo: izusek/Getty Images)

The U.S. economy added 128,000 jobs in October, while the unemployment rate rose to 3.6%, according to Department of Labor data released Friday.

Despite a General Motors strike, 128,000 jobs were added in October, according to the Bureau of Labor Statistics report—about 8,000 fewer jobs than were added in September.

Economists predicted the General Motors strike would heavily impact the October jobs report, predicting that only 89,000 jobs would be added and that unemployment would rise to 3.6%, according to CNN. The unemployment rate dropped to 3.5% in September, the lowest unemployment rate since December 1969.

“Even though much of the expected October slowdown will likely be due to temporary factors, we don’t want to ignore the impact the trade fight is having on business job decisions,” Beth Ann Bovino, U.S. chief economist for S&P Global Ratings, told CNN.

Economists also worried before the jobs report was released that the economy would lose jobs during October.

Job growth has come back strong after February, when just 33,000 jobs were added.

The unemployment rate has held steady between 4% and 3.7% for more than a year before the April jobs report showed it drop to 3.6%. Prior to April’s report, the consistent unemployment rate suggested that workers are jumping back into the workforce to fill open jobs, rather than the workers who are currently collecting unemployment welfare, according to The Wall Street Journal.