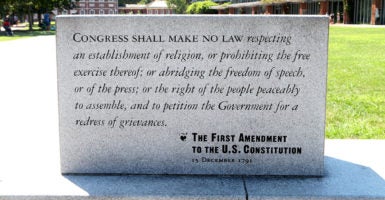 A marble plaque with the First Amendment engraved in it sits on Independence Mall in Philadelphia, Pennsylvania, Aug. 27, 2016. (Photo: Raymond Boyd/Getty Images)

Will someone in our free press stand up for free speech?

Just as Facebook CEO Mark Zuckerberg has been harangued by politicians and legacy media journalists about not doing more to censor speech on his social media platform, an opinion column Tuesday in The Washington Post called for passing “hate speech” laws that take direct aim at undermining the suddenly problematic First Amendment.

Richard Stengel, a former editor at Time magazine who then served as the State Department’s undersecretary for public diplomacy and public affairs under President Barack Obama, argued that the First Amendment is outdated and that America’s unique protection for free speech just doesn’t work anymore.

Stengel wrote that while traveling the world and “championing the virtues of free speech,” he “came to see how our First Amendment standard is an outlier.”

Yes, the First Amendment is an “outlier,” and for that, we should be incredibly thankful as Americans. It is undoubtedly a cornerstone of American exceptionalism.

Not for Stengel, however.

“Even the most sophisticated Arab diplomats that I dealt with did not understand why the First Amendment allows someone to burn a Koran,” he wrote. “Why, they asked me, would you ever want to protect that?”

As the Washington Examiner’s Becket Adams wrote, Stengel seems to be saying that he looks favorably on anti-blasphemy laws.

Stengel wrote that our broad protections of free speech, which allow “hate speech”—however one may define that—“diminishes tolerance” and “enables discrimination.”

“Isn’t that, by definition, speech that undermines the values that the First Amendment was designed to protect: fairness, due process, equality before the law?” he asked.

The short answer to that long question is: No.

The First Amendment—really, the freedom of speech and freedom of the press more broadly—is necessary not to promote “fairness,” but to help us find the truth.

The Founders—though they disagreed about much else—widely understood that no individual and certainly no government is the bearer of all truth. A free society protects those means to pursue the truth, which necessarily means also protecting speech and ideas that are “wrong” or “hateful.”

As many on Twitter noted, shame on the media for eagerly embracing the idea that the First Amendment is, perhaps, a bad thing and for not responding with a robust defense of the freedoms that make their work possible.

All speech is not equal. And where truth cannot drive out lies, we must add new guardrails. I’m all for protecting ‘the thought that we hate,’ but not speech that incites hate. It undermines the very values of a fair marketplace of ideas that the First Amendment is designed to protect.

In numerous places around the globe, governments have begun cracking down on hate speech and free speech, setting up government commissions to ultimately decide what is “real” and what is “fake” for the people.

Stengel argues that hate speech laws are designed for the government to prevent hate and terrorism, but what if the governing authorities themselves promote such evil? What then?

Whether under the jackboot authoritarianism of China or the soft despotism rising in Europe, these laws curtailing speech, and putting it under government authority, are ultimately harmful and destructive.

Stengel’s “fair marketplace of ideas” is not a free one. It is a euphemistic argument for inevitable tyranny.

Unfortunately, as a recent poll found, many Americans have come to think that the First Amendment needs a rewrite to fit the “changing cultural norms of today.”

That’s why we aren’t a pure democracy—and why we have laws and institutions that protect individual rights.

The freedom of speech, a God-given right protected by the Constitution, is not subject to revision because of changes in technology or culture. It is simply a timeless right of all men and women, though it has been frequently—and often ruthlessly—violated.

America’s culture of free speech and the First Amendment that protects it are incredible blessings that have been passed down and fostered by generations of self-governing people.

It’s too bad more people in institutions intended to protect these ideas are in fact undermining them.