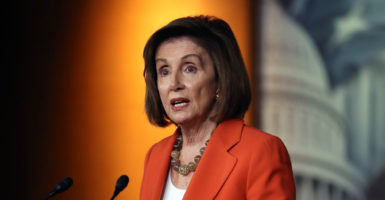 House Speaker Nancy Pelosi delivers remarks at a press conference at the U.S. Capitol Oct. 31, 2019, in Washington, D.C. The House of Representatives is scheduled to vote on a resolution formalizing the impeachment inquiry centered on President Donald Trump later in the day. (Photo: Chip Somodevilla/Getty Images)

We are now knee-deep in the throes of the constitutionally directed authority of the U.S. House of Representatives, the people’s chamber, to call into question the behavior of the most well known sitting public official, the president of the United States.

In the history of our great republic, the House has completely executed this power and impeached an officeholder in just 19 instances—17 of the federal judiciary and two sitting American presidents, Andrew Johnson and Bill Clinton. Two other U.S. presidents have faced impeachment inquiries: Richard Nixon and now Donald Trump.

It’s important to recall this history lesson because the framers of our Constitution intended that the removal of a sitting federal official of high office be particularly, if not excruciatingly, difficult.

The Founders were well aware of bitter partisanship, even in 18th-century America, and so they wanted to insulate officeholders as best they could from the flimsy political whims of the people’s house in Congress.

That being said, I do disagree with the president and his supporters when they call the current proceedings unconstitutional and when they suggest that Democrats have no authority to act.

This process is one of the most powerful instruments an institution of government can wield. It is a necessary check, in our system of checks and balances, to maintain the proper balance of power between all branches of government in our great democracy. It is an instrument that deserves to be hallowed through all time if we are to guarantee that no one person can set themselves above the law.

Yet the actions of House Democrats, led by Speaker Nancy Pelosi, are running counter to the spirit and even the letter of the authority they swore to uphold. As a result, they are making this current impeachment attempt decidedly un-American.

Let’s begin with the impeachment process itself. It goes without saying that something is wrong if the chamber has not yet been able to officially inaugurate these proceedings, as the House has been able to successfully do so many times before, with a full vote of the body.

Why have they not held a vote to officially begin the inquiry? The failure to do so may seem petty or inconsequential to the average observer. However, the act of formally tallying the voice of every sitting member of that body should be heard and recorded for all Americans to see. After all, the framers wanted to make it difficult to remove a sitting president, to “undo” an election by the people.

With this intention in mind, shouldn’t these 435 individuals stand up and be counted on the critical question of whether they should unring the bell of liberty that called for Trump to hold office in the first place?

This dilemma brings us to the only logical conclusion as to why Pelosi, Steny Hoyer, and Adam Schiff don’t want to hold a vote: to protect those rank-and-file members in vulnerable pro-Trump districts.

Yes, the House Democratic Caucus is divided on the question of removing a sitting president, even one as controversial as Trump. Pelosi knows this. Unfortunately, the most liberal in her party have pushed and pushed for this, so she has had no choice but to acquiesce.

Still, Pelosi must protect those 30 to 40 Democrats, which means there will be no formal vote launching the inquiry. Instead, there has been cloak-and-dagger closed-door interviews of the president’s very accusers and alleged whistleblower. Is that American? What happened to the writ of habeas corpus—the right to face one’s accuser?

Pelosi’s “protection at all costs” approach toward her party’s vulnerable members is costing the speaker and the Democrats. It unnecessarily leaves those Obama-Trump swing voters doubting Democrats’ sincerity in trying to find actual high crimes and misdemeanors that this president may have committed. Furthermore, it gives Romney-Clinton voters a reason to return to the Republican fold.

Perhaps the worst element of House Democrats’ actions is the dangerous precedent they set for future Congresses.

How many times has the House of Representatives been controlled by a different party than the sitting president’s? Scores. Do future House majorities now have complete license to pursue impeachment on shaky evidence, without a formal vote and with inquiries led behind closed doors? Is that the instrument of impeachment the American republic needs or wants? I think not.

History will not be kind to this Congress. Its track record will speak of no major legislative wins, even fewer federal basics such as spending bills to keep the government running, anemic judicial appointments, and an outsized obsession with sinking this president on political grounds. That’s not what Americans voted for, and this obsession will not be helpful to the Democrats come the 2020 election cycle.

To use the sacrosanct tool of impeachment in such a constitutionally cavalier way betrays everything that the House Democrats signaled they stood for when Pelosi took the gavel. Her caucus knows better, and she’ll spend the rest of her speakership trying to justify using a uniquely American protection in such an un-American manner.