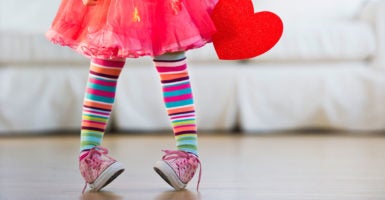 Texas Gov. Greg Abbott announced an investigation into the case of a 7-year-old boy whose mother plans to transition him to a girl against his father’s wishes.

Abbott, a Republican, tweeted that the Texas Attorney General’s Office and the Texas Department of Family and Protective Services is looking into details of James Younger’s case. A judge was expected to make a final verdict in the court case Thursday.

“FYI the matter of 7 year old James Younger is being looked into by the Texas Attorney General’s Office and the Texas Department of Family and Protective Services,” Abbott tweeted.

FYI the matter of 7 year old James Younger is being looked into by the Texas Attorney General’s Office and the Texas Department of Family and Protective Services. #JamesYounger

Jeff Younger said his son is happy being a boy and does not desire to be a girl, according to The Texan. James’ pediatrician mother, Anne Georgulas, as well as counselors and therapists who testified on her behalf, told the court that the 7-year-old is transgender and had expressed to each of them that he wished he were a girl.

A Texas jury decided Monday that Jeff Younger cannot stop James’ social gender transition to a girl. A social transition refers to when a person begins to publicly conform to the opposite gender, according to Planned Parenthood.

Georgulas said her child’s gender identity should be affirmed by wearing dresses, being treated as a girl, and being called “Luna,” according to The Texan.

The jury decided Monday that Georgulas should receive sole managing guardianship of James and his twin brother Jude Younger.

Conservatives spoke out on Twitter in defense of Jeff Younger and his desire to prevent Georgulas from transitioning James following the Monday verdict. Neither Jeff Younger nor his legal representation responded to requests for comment from The Daily Caller News Foundation.

“Every conservative on Twitter should be tweeting about the James Younger case today. If you’re a conservative and you’re not using your platform to draw attention to a case like this, what the hell are you doing,” conservative commentator Matt Walsh tweeted Tuesday with the hashtag “#ProtectJamesYounger.”

Georgulas’ legal representation, Texas lawyers Jessica Hall Janicek and Laura Hayes, told The Daily Caller News Foundation in a statement Wednesday that a “completely distorted and untrue version of events in this case has been circling the media.”

“It has resulted in threats, harassment, and even vandalism of my client’s property,” the lawyers told The Daily Caller News Foundation. “The pleadings in this case are available online, including, but not limited to, the Court’s prior annulment proceedings and the numerous findings of fraud that the Court made in this case against Mr. Younger.”

The lawyers said their client “is being viciously attacked and threatened by complete strangers based on false and untrue statements.”

“That is unacceptable,” they added. “We respectfully request that before the media reports on this case, a thorough investigation is completed into the actual facts and truth of the situation.”